Are NFL Fans Getting Tired of the Stadium Experience

An article that caught my attention last week was Alex Marvez’s story about the NFL looking for ways to enhance the in-stadium experience. Eric Grubman, the league’s chief financial officer and executive vice president of business ventures, said NFL brass remains focused on improving “in-stadium engagement” for fans. That includes ensuring some of the best elements of watching games at home are duplicated inside NFL venues. 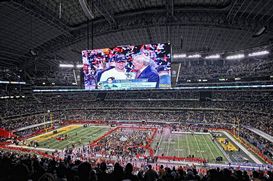 The Cowboys Stadium experience is impressive on a large scale, but needs to focus on the little things.

“When there are gaps (in action), if you think back 10 or 15 years ago, the tradition was to put relatively simple things on a relatively simple JumboTron,” Grubman told FOXSports.com. “What we’re asking clubs is to think about a world-class programming mindset. Don’t depend on the exact flow of what’s going on on the field to provide a 3-1/2-hour entertainment experience for the fan. There’s only a certain amount of time when there’s action on the field.”

To date, I have been to 26 out of the 31 NFL venues, our family was season ticket holders for the Eagles for twenty years, I was a season ticket holder of the Chargers for 7 years and I go to a minimum of eight NFL games a year. So I think I am qualified to throw in my two cents on this one.

Dear NFL,
If you really want to improve the in-stadium experience forget about the jumbotrons, the hand-held gadgets, special smart phone aps, the halftime show, texting gimmicks with sponsors, music, and concentrate on the following basic issues that are encouraging fans to stay home for the HDTV experience.

1) Ticket prices: According to the Team Marketing Report the average cost of taking a family to a game in 2012 is $427.00. I assume this is a family of three. For a family of four buying decent seats, I would put the cost closer to $650.

It’s a fact: NFL fans are tapped out in this category. Prices for tickets are at their ceiling so owners may think twice about pushing them any higher. I’ve been to too many games that claimed to be sold out and just by looking around the stadium, 10 to 20% of the seats are unfilled. NFL owners risk losing generations of fans who are skipping the season ticket experience because they are simply out of fiscal reach.

My suggestion, why not add flex pricing based on the previous years record. Your team wins less than 5 games decrease the price. If they go to the Super Bowl, increase it if it’s not already at a ceiling. Ticket prices per team are not always reflective of the product on the field. If your product stinks, please lower the tickets and keep fans coming to the stadium.

2) Getting in and out of the stadium: It amazes me to see hundreds of million dollars go into new stadiums without the traffic and parking issues getting the attention they deserve. The NFL must realize that getting to and from the stadium is the most stressful part of game day for any fan and it is THE BEGINNING OF THE STADIUM EXPERIENCE. Stadium designers and city planners really have to rethink this component of the stadium experience because I haven’t been to many who have got it right. If you get to the Chargers stadium within an hour before the game you get funneled to the very back corner which can take well over 30 minutes to get to a parking spot and easily over an hour to get out. The majority of stadiums I’ve been to are a nightmare to get in and out of. However, the downtown stadium experiences are some of the best.

CONTINUE READING ABOUT THE FAN EXPERIENCE ON PAGE 2