One of the main reasons we have seen so many rule changes lately regarding head contact is that the NFL realizes that there is a huge financial liability that comes along with the long-term damage caused by concussions and head trauma.

A developing body of scientific evidence is mounting for current and retired NFL players that concussions and head trauma they suffered while playing causes long-term brain damage. The impact of liability is potentially large for the NFL and each team's workman's compensation requirements.

If the retired players don’t get what they feel they deserve in increased benefits in a new CBA, the concussion and head trauma issue will be the tip of their spear in holding the NFL accountable for their current and future medical needs and potential disabilities caused by head traumas.

Brains being donated by retired players for additional research, and more money being poured into research from all sources is coagulating the facts that those who suffered head trauma in the NFL will most likely suffer some long-term effects such as depression, Alzheimer’s and early onset dementia.

The NFL is quietly frustrated about this issue because they don’t feel they should be held 100% responsible for potential head trauma liability that is real, growing and is certainly on its way down the pike. NFL team doctors will testify that when players arrive at the NFL Combine for their first NFL physical, a large percentage have disclosed having suffered multiple concussions. As one general manager put it to me at the 2011 Combine: “we are getting damaged goods from the colleges but we will most likely carry 100% of any future liability once that player signs that first NFL contract with us.” 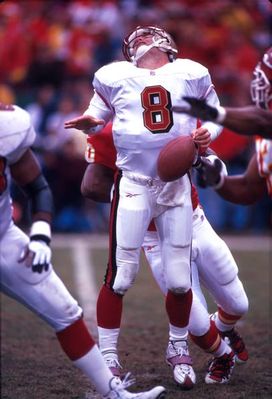 ICONSteve Young's career was plagued by concussions, which ultimately led to his retirement.

As a former NCAA college player, I suffered 3 concussions. One so bad I didn’t know where I was for 36 hours and couldn’t remember the names of my teammates. My freshman year in college I was taught to block by leading with the butt of my helmet.

As an agent I, for one, encourage my rookie clients to secure disability insurance until they get to a lucrative second contract. Within the application process they must fill out insurance forms disclosing all previous injuries, including concussions. In my experience in walking through the forms with my clients, just about every one of them had suffered at least one serious concussion in college.

If NFL retired players, the union (which will must likely be reformed once a new CBA deal is struck), and their respective attorneys are successful in connecting responsibility and financial liability to the NFL, don’t be surprised if the NFL taps the NCAA on the shoulder and says, “hey, we have data proving that our players have suffered head traumas while playing college football and we want you to share in the financial obligations the courts have put upon us”. Or, the lawyers for retired players and even former college players who did not play in the NFL will figure out (if they haven’t already) that they can go directly to the NCAA, via the courts, and ask them to contribute their part in caring for those who have suffered head traumas while playing college football.

One very high up NFL executive in the league office told me that “they are very frustrated that the NCAA gets all the upside of the use of talent with very little of the downside the NFL must carry once a player signs his first NFL contract.”

The conundrum for the NFL is that they have to remain in good standing with the NCAA and its member programs to get access to the their players, film, medical records, games and coaches for their evaluation process. If the NFL does something to piss off its member schools they could easily close the door to scouts from getting the access they currently enjoy and need. However, the amount of new money the NCAA is raking in from its’ new TV contracts will certainly attract the attention from those looking for somebody to pay. And the NFL may not be as sympathetic to the NCAA, especially with its newfound wealth, as they have been in the past. After all, they are sitting on mounds of medical records that could eventually be trouble for the NCAA. This is an issue worth watching.