Do the fans really care about player safety?

NFL style of play is a violent sport. It always has been but it may not always be. Enormous strides have been made over the last five years by the Commissioner, Union and owners in changing the game for safety’s sake to prevent more injuries, especially concussions. Does even more need to be done? Absolutely! More has to be done across the board but without damaging the integrity and traditions of the game. The question now is; What more can we do without radically changing the game, governing all aspects of contact, and potentially losing fans but yet increasing safety? It’s a fine line that can change the game, as we know it.

Roger Goodell recently tabled, “do we really eliminate the Kick off”, which does account for the most amount of injuries and concussions per single play. That would be like taking away the stimulating “POP” noise a bottle of champagne makes when opened. I don’t think Dom Perignon will keep its sales at current levels with a screw cap bottle. Or, it would be like attending a heavy weight fight in the eighties/nineties without Michael Buffer saying, “Let’s get ready to rumble!” The fact is that the kick off is one of the most exciting plays in football, along with its ugly cousin; the onside kick, which also accounts for many concussions. 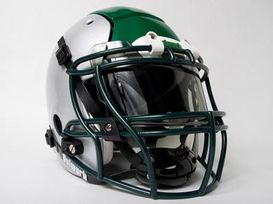 Helmet sensors are on the way for NFL players.

Do we introduce a radical new helmet style that looks more like Lacrosse gear? I just can’t picture it. That would be like painting James Bond’s silver Aston Martin pink. It can still go fast and shoot missiles but do James Bond fans want to watch it? Doubt it!

The fact of the matter is that the game is changing before our very eyes. It is being tamed and dialed back. The question remains, how much can it take before it hits a tipping point where fans don’t see it as the game they grew up with? Sadly, the violent part of our game is the marketing department. Hence the game attracts players who like to exercise their testosterone on a legal stage while being paid well for it. Yes, they want to know the risk they are taking with their bodies and brains, but even with knowing the facts, I would say (based on the players I spoke with) 98% of all players, both past and present, will/would assume the physical risk associated with playing football, at any level. I know I would too, even though I sustained four severe concussions throughout High school and college.

Look, there is a reason that we all have seen Joe Theismann’s leg being mangled and Warren Sapp’s hit on a defenseless Chad Clifton thousands of times. There is a saying in the media business that goes; "if it bleeds it leads!” Those big body jarring hits, gruesome injuries and blindside ball popping hits get our attention and tugs at our most times dormant attraction to violence.