Imagine you are sitting in a hotel room waiting to interview for your dream job. You were flown in first class, picked up in a stretch limo, and pampered in a 5 star hotel the night before. You had a 5-course meal with your potential employers at the best restaurant in what may be your new home city for years to come. You prep again for your interview after dinner and again early morning over a few cups of coffee. 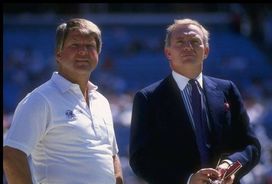 Jimmy and Jerry had an at times contentious relationship.

You are ready to roll, adrenaline is pumping, and this is it, just 20 minutes away from the interview of your life. As you take the elevator downstairs to catch a limo, your phone rings but you drop the call as you ascend 22 floors from the penthouse suite. As you get out of the elevator you can hear the ping sounds of multiple texts coming in after your phone regains service. Probably family and peers wishing me good luck you think to yourself. You set down your coffee and brief case in the lobby to check your phone. Your first text reads, “sorry you didn’t get it buddy”. The next one reads; “I can’t believe they went with that guy, screw them”. Several more have the same theme. Your stomach drops, you feel heavy as lead and you fear the worst. Your phone rings, it’s your potential new boss. He says, hey I’m really sorry but the owner decided to go another direction”. “We hired somebody else!” Welcome to the NFL!

If you have ever seen the HBO series, Game of Thrones (different factions and individuals competing for power, glory and of course the throne), then you may have an understanding of how cut throat it is to climb the NFL ladder of power.

The job of GM, head coach, OC, DC, assistant coach, player personnel director, and VP of football operations are highly sought after, dream positions. There are thousands who want them and only a very few who will get them. In order to get these coveted positions, grown men will stop at nothing to get to their respective throne. As one seasoned NFC GM put it to several years ago, “if you work with coaches, always remember that most are unconscionable when it comes to getting what they want.” Another friend told me after being in the front office for just a year, “so you think your business (the agent business) is cut throat, it’s worse on our side.”

There are countless stories of friends coming up through the NFL ranks together as either coaches or front office execs or scouts who eventually turn on each other when a position of power opens up. The venomous tongues that exist in this industry are worse than the meanest schoolgirls. Gossip and backstabbing is all part of the landscape.

Agents get to see and hear a lot of the drama this time of year, not to mention become a part of it. For example, one of the biggest problems in Philly this year wasn’t Howie Roseman or Juan Castillo. It was a few power hungry individuals who undermined those above them by getting the players involved in their own agendas.

Why is Michael Lombardi’s hiring as a player personnel man in Cleveland met with criticism? Most likely because his rivals are jealous of him and a few media people know he won’t give them the scoop that he/she was probably getting from someone else. Lombardi, after all, is the same guy that Belichick confides in and that Jim and John Harbaugh both tried to hire the day after they got their head coaching jobs.

CONTINUE READING ABOUT JOBS IN THE NFL ON PAGE TWO...