Get to know the NFL business calendar

As an active agent, it’s essential that I (goes for all agents), stay on top of important dates. I for one know not to plan any vacations during cut down dates, the first weeks of free agency and contract time for draft picks. Then of course there is the Senior Bowl, the East West Shrine game, the NFL Combine, the NFL Draft and the Super Bowl, which I may also attend.

For anyone who wants to get a better understanding of the business of the NFL, get to know these dates, starting now:

October 29th 2013: NFL Trading Deadline: No player trades may occur after this date.

October 30th 2013: ALL players are now subject to the waiver system for the remainder of the regular season and postseason.

November 12th 2013: Deadline at 4:00pm NY time for clubs to sign their Franchise and Transition players. If still unsigned after this date, such players are prohibited from playing in the NFL for the remainder of 2013.

Deadline at 4:00pm NY time for clubs to sign their Unrestricted and Restricted Free Agents to whom proper tender was made. If still unsigned after this date such players are prohibited from playing in the NFL in 2013.

Deadline at 4:00pm NY time for clubs to sign drafted players. If still unsigned by this date such players are prohibited from playing in 2013.

*Although it is rare to not have a drafted player signed by this date, some have played the holdout game well into the season. This is an unlikely happening under the new 2011 CBA.

December 30th 2013: Clubs may begin signing previously terminated free agent players for the 2014 season. This is also known as futures contracts. These players are being signed for the upcoming year even though the new league year has not begun. These are players who were not on an active roster when the previous season ended.

This is also the first time we will see the 5th year option exercise period begin for first round draft picks from the 2011 draft (A new feature under the new CBA). To exercise the fifth year option the club must give the player written notification of their intent to exercise before May 3rd. It will be interesting to watch which teams exercise the option clause on their 2011 first round pick.

This is the earliest date that clubs may renegotiate or extend the rookie contract of any drafted rookie in the 2011 Draft.

This marks the date that eligible players (at least 4 credited seasons) who started the regular season on the active/inactive roster and were thereafter released after the start of the regular season may apply for termination pay. The club must pay the unpaid balance of the eligible players 2013 paragraph 5 salary. Players may only apply for termination pay once in their careers, and the claim should be submitted by January 31st 2014.

February 3rd 2014: Waivers begin for 2014: A 24 hour claiming period for players with less than 4 credited seasons. Players with 4 or more credited seasons will not be subject to waivers until after the trading deadline of the 2014 season. 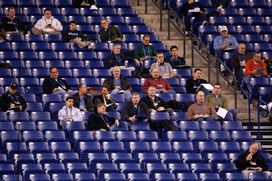 There is a lot going on behind the scenes at the NFL Combine.

February 19th – February 25th: NFL Combine, Indianapolis, IN. The "unofficial" beginning of free agency for 2014. This is where a lot of the talks start for new contracts and/or extensions for the upcoming year. Not to mention 300 plus potential draftees getting their biggest interview. This is also where the NFLPA Contract Advisors Seminar is held yearly.

Expiration date at 3:59 pm NY time of all player contracts set to expire after 2013 season.

May 2nd 2014: Deadline for signing of offer sheets by Restricted Free Agents.

Deadline for old club to send tender to its unsigned Unrestricted Free Agents to retain rights if player is not signed by another club by July 22 or beginning of veteran training camp, whichever is earlier.

July 15th 2014: Any club designating a Franchise player shall have by 4:00 pm to sign the player to a multi-year contract or extension. After this date the player may only sign a one year contract with his prior club.

July 22nd 2014 (or Veteran Reporting date): Signing period ends at 4:00 pm NY time for Unrestricted Free Agents to whom June 1 tender was made by old club.

For agents there are other commitments that are more informal. We have to get on the road and see our clients play, attend their weddings and/or just get some quality face time. Then on top of that there is recruiting of new players. I for one have already visited 5 different college campuses to visit with prospects, one at least 4 different times. Once the college season is over, it’s back on the road again to give final presentations to our prospective new clients.

Although an agent’s life may appear glamorous on the outside, the awareness switch always has to be on, the bags always are packed and the phone always charged.