Is the business of college sports getting too big for itself?

Major props go out to Commissioner Larry Scott and the Pac 10 for its recent $2.7 billion TV deal. Conference TV revenues will go from about $62 million a year to $252 million per year. I know we all love college sports but this is big business. Additionally, the ACC recently inked a deal for $155 million per year and the Big 12 for $130 million per year. Considering that many conferences also have their own TV and digital networks they are developing, there could be more money coming down the pike once these properties mature and start firing on all cylinders.

The acceleration of growth and value for these college properties do not come without growing pains. As new money starts flowing into the athletic departments, micro battles for everyone’s share will form in each AD’s office. Boosters who have been donating cash for years will want to see more luxury boxes. Head coaches in football and basketball will see continued salary increases while the other sports will continue mismanaging their programs.

Believe it or not, the majority of college athletic departments are run a lot like the US government, with recurring deficits. Boosters and private donations usually make up the shortfall each year to bring the departments into the breakeven area. For example, one Pac 10 AD recently told me that when he arrived to take over the reigns of the athletic department, all but two sports were operating in the red. He said that every coach will spend his or her allocated budget and then some, without paying detailed attention to the bottom line. The problem starts when a coach gets an extra $10,000 from a fundraiser or a booster one year and then expects it to be there every year and spends the money anyway before it is garnered. The fact is that the majority of college sports such as golf, softball, field hockey, swimming and diving are big money losers for most athletic departments. And with Title IX and other political pressures to spread the wealth, it will be just a matter of time before most schools eat through their new revenue windfalls to end up operating in the red again.

The biggest problems I see facing university athletic programs is that their personnel isn’t qualified to handle the big business of college sports. Most Athletic Directors started out working in the athletic department in compliance or even coaching one of the sports. They move up the ladder to the job of assistant AD and then eventually land the title role of AD upon a vacancy. Thus, many don’t have any real outside job experience in the business world. And with figures such as 30 million up to and over 150 million in revenue rolling in per member school per year, and with operating budgets to match, many just don’t have the experience to handle the job. So eventually what happens is that consultants are hired and boards of trustees start calling the shots. Eventually, for a lot of campuses, there are too many cooks in the kitchen calling those shots and even fight for the power to do so. As a result, many school presidents feel more comfortable spending money on search firms to hire their head coaches. 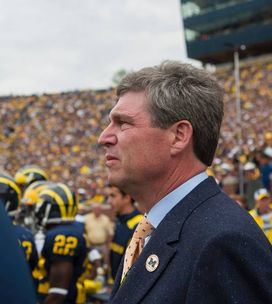 ICONDavid Brandon left his $2.6 million salary at Domino's to run Michigan's athletic program for up to $825,000 a year.

There are some schools that are starting to get it right. Michigan for example has hired David Brandon, the former CEO of Domino’s Pizza. He has a long-term plan for maximized revenues, running a realistic budget and planning for the long-term while keeping the spending dollars at sobering levels. Pac 10 Commissioner, Larry Scott, is a Harvard graduate and was the former president of the Women’s Tennis Association from 2003 to 2009. Women’s tennis is big business. Larry was used to doing TV and sponsorship deals. While at the WTA, he increased sponsorship revenues fivefold and total revenue grew over 250% under his reign. He was obviously capable of helping the Pac 10 max its property value.

Another problem I see coming down the pike for the NCAA and its member schools is the disparity between what the players receive in stipends, especially in football and basketball, versus the revenues those sports produce. While most college athlete stipends don’t cover the average cost of living for a scholarship athlete, salaries for coaches and administrators will rise, non revenue generating sports will get more money but will eventually start running deficits again, and the competition to win will lead to building more elaborate facilities.

As the economics of collegiate sports escalates and the dividends of the transparent wealth gets distributed throughout the respective athletic departments, student athletes’ resentment (especially in football) will grow, and thus more problems like what we saw at Ohio State and North Carolina will continue. I’m not sure if increasing stipends to athletes and getting more qualified individuals to run the NCAA and the athletic departments will help but I know it’s a step in the right direction in curbing the derelict problems we see each and every year. For an agent who represents both college head coaches and players, was a scholarship athlete, I can tell you first hand, what you see now is just the tip of the iceberg. Where there is big money, big problems usually follow.