The clients I have/had that played eight or more years in the NFL have one thing in common: they all embraced some type of nutrition plan and/or habits that help them recover faster, have more energy, stay lean and maintain stamina throughout a season.

Years of lifting weights, numerous collisions, and pushing the body when it’s fatigued causes stress and damage that the body may or may not recover from. In my 27 years as an agent I’ve seen that the majority of my clients leave the game with broken bodies.

The good news is that players are getting smarter, have more resources and their teams are even helping with education and better meals.

Now we all know that the NFL poster child for health and longevity is TE Tony Gonzalez of the Atlanta Falcons. Tony is truly committed to a nutrition plan that he swears helps him survive as an NFL iron man.

He has a diet that is made up of 80% plant based (spinach, Kale, cucumbers, carrots and a variety of fruits) and 20% meat/fish based. Playing a position that runs a lot, endures an abundance of contact and is taxing on the body, it’s truly amazing that Tony is in his 17th season and looking more like a 27 year old than a 37 year old. For a look at Tony’s diet refer to this issue of Men’s Journal.

Here are some of the tricks and trends of what of your favorite NFL players are doing to play longer and survive the harsh toll of playing in the NFL. 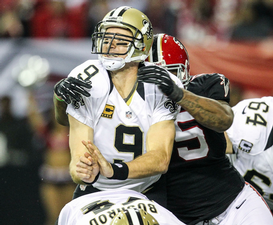 Drew uses Advocare products to assist him in the recovery process.

Many players take supplements. Drew Brees is a big user of supplements. Drew is not a big guy but he handles hits like he is. Drew is a big believer in recovery and has adopted the product line from Advocare to help him. Even though Drew is a spokesman for the company, he was using their products before the endorsement relationship evolved and materialized. It’s a company that is highly conscientious of their ingredients and made a commitment almost a decade ago to be acceptable to the highest of NFL standards. Some of their more popular products used by Drew and other players are Catalyst (a branch chain amino acid that helps prevent your muscles from breaking down), Spark (a caffeine product thoughtfully engineered with an abundance of vitamins, and Night Time Recovery (works to help speed up the recovery of damaged muscles while you sleep.

Another powerful supplement gaining momentum is fish oils. Outside of helping to reduce cholesterol they are showing signs of keeping joints such as knees, shoulders, and ankles fresh and lubricated.

More and more NFL players are saying goodbye to gluten-based products. Several of my clients avoid gluten and they say that have noticed their digestive system works better and they have more energy. Recently retired client, guard Eric Steinbach, had some horrible stomach issues for years before he discovered he was allergic to gluten. After cutting gluten completely out of his diet he was actually able to maintain a better body fat ratio and had better control of weight. He told me that after going gluten free he could sleep better and recover faster.

Client DT Johnny Jolly of the Packers is down to 325 pounds for the first time since his rookie year, seven years ago. Johnny is not drinking any alcohol and told me the biggest thing that has help him shed the pounds (he was about 350 in June) is that he quit eating after 7pm. He told me he sleeps better and wakes up with a ton of energy.

Eating before going to bed is really bad for your body. Jay Hoehn, a La Jolla based trainer and health guru (who works with NFL players), said to me, “not eating at least two hours or more before going to sleep is essential to your body's ability to repair itself and get essential rest. If there is food in the stomach before going to bed the body has to go to work to digest it and break it down. If it’s doing that, your body’s natural cell repair and recovery resources can’t fully be allocated to the areas that need them the most.” He also said, “that the first three hours of sleep is prime time for your body to replenish its’ muscles, brain, organs and various tissues.” Therefore, even guys with a solid nutrition plan may not be getting the full benefit if the timing of their meals and snacks are out of sync with the body’s natural clock. The Niners and other teams talk to their players about the timing of the meals and sleep patterns.

Eating a modest amount of oatmeal and fruits such as berries with a little honey in the morning will help your body burn its fuel more efficiently.

I personally have adopted some of these habits such as eating blueberries (started about 7 years ago) every morning, I cut down on gluten products about 80%, take fish oils religiously and don’t eat two hours prior to going to bed. The result for me is that I haven’t been sick in 7 seven years, I’ve lost and kept off 20 pounds, my cholesterol is down 30%, I don’t need naps, I sleep deep, and my joints feel 20 years younger. These tips aren’t just for NFL players as any one can benefit, as I did, by committing to just a few simple lifestyle changes.