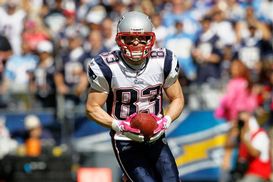 Wes Welker had a breakout year in 2007, yet wasn't voted into the Pro Bowl

Wes Welker has been a huge difference maker for the Pats. Every defense in the league has a hard time stopping him. A case could be made that he should have made the Pro Bowl after the 2007 season.

It’s obvious that everyone who makes the pro bowl is a high quality player worthy of the award. However, the best three players at their respective positions in each conference aren’t always represented when the final votes are tallied.

Here’s why: The voting process is split one third between fans, players and coaches. Players and pro personnel directors in the league that I have spoken to say the process is flawed and only produces about a 60 to 75% accurate outcome.

The majority of the fan vote is a popularity contest geared towards their hometown favorites and those players recognized from Super Bowl teams, who usually get a lot of prime time TV exposure. The triple whammy goes to those great players playing on bad teams in a small market with no prime time TV games.

In other cases, rising stars can be completely left off the ballot. This year, Chiefs TE, Tony Moeaki is this year’s prime example. With the AFC’s pro bowl mainstay, Dallas Clark, out for the year, Tony has a good and deserving chance to make it. However, he will get short changed on the fan vote because he’s not even on the ballot. What is more frustrating to fans is that the system doesn’t even have a write-in method or procedure for adding those deserving candidates left off the ballot. This can happen to many players who rise fast, especially rookies. When I spoke to the league office, all I got was apologies and an acknowledgment the process should be changed.

The other guys who are snubbed the most are the offensive lineman. Mainly because most fans aren’t watching the O-line play and really don’t focus their attention on lineman from other teams.

Browns’ Guard Eric Steinbach is one of the highest paid linemen in the history of the NFL. The marketplace dictated his value as a free agent in 2007. He’s a super athletic player that has actually played guard, center, and tackle all in the same game. Another game he pulled 16 times. Players and coaches know that he’s one of the best and most versatile linemen in the league. However, he has played for two small market AFC teams and has little TV time over his career and no Super Bowl appearances. Although he has been an alternate in 2005 and 2007, and he does extremely well on the coaches and players voting, he gets little love from the fans outside of Ohio. On the contrary, most o-linemen playing on super bowl teams like the Pats and Colts kill it on the fan vote. If the Browns can sustain their winning ways it may be his year.

Players get to vote on other players in their conference but only on the other side of the ball from themselves. Each team has to elect 3 players from each position, none of which can be on their own team. This system can get a little spiteful at times. I had a former Redskins client tell me that there was a player rule that nobody was allowed to vote for a Cowboys player.

Another common practice, still in use, is to NOT give votes for the best, most deserving player in the conference but to a back up or a guy who doesn’t have a chance so that the player from your own team, on the other side of the ball has a better chance.

Another client told me that their defensive players refused to vote for T.O. even though he deserved the vote. It’s not uncommon for players to blackball other players they don’t like.

In most locker rooms, the vote gets done by position group. For example, O-lineman vote for D-lineman, defensive backs vote for receivers, and vice versa. In others, the votes are dictated by one or two Pro Bowl vets. In a lot of cases they want to make sure their buddies on other teams make the trip.

The coach’s vote might be the most accurate of the three. However, one NFC East Pro Personnel Director told me he laughs every time he sees the coach’s vote. He said most coaches only know their division opponents and fall in love with the same guy every year. Some head coaches do hand the ballots over to their GM’s or pro personnel to weigh in on the vote.

The Pro Bowl is in place for the fans but it is extremely important to the players. The Pro Bowl label makes a difference at contract time, in a players post career, and even helps to get him on the Hall Of Fame ballot. I would like to see the league tweak the voting system by doing a few things differently.

For one, the vote shouldn’t start until week 9 and the ballots should include more than 23 players from each team. The majority of snaps are played with 3 corners and 3 wide receivers so the ballot should reflect that. Furthermore, fans should be able to elect any player, even if not on the ballot.

I also think Pro Personnel Directors from each team should have a vote. They are the stock analyst of the league. Their job is to evaluate all pro players so they are best qualified.

Another percentage of the votes should go to both team beat writers and some national scribes. Most of these guys have their pulse on the performance of every starter.

The solution: 20% each; Players, coaches, Fans, Personnel Directors, and writers.