Running the gauntlet to the NFL Draft

When the college season comes to a conclusion, a senior NFL draft prospect can finally exhale - but only for a quick moment. A few days after his bowl game he has to run the gauntlet of workouts, traveling, all-star games, the combine, pro day, individual workouts, interviews and team physicals that extend into April.
For the Rookies, there is very little rest once their season ends. From January to April the players and agents run through a series of gauntlets that can define their draft value.

The All Star Game

Starting in mid January, the all-star games start. About 350 of the best prospects are invited to strut their stuff for one week at one of four different games. The most important part of these games is the practices. This is where the scouts, coaches, and even the owners get an up close look at the new draft class.Interviews are also a big part of the all-star week. The week is important for all players because a chance to “stand out” and create some separation from their peers.

The agent’s role: To mentally and physically prepare the players (via trainers) for every aspect of the game, especially the interviews. In addition, gather and exchange important intel on his or her clients. Promote your client by starting conversation with scouts, media and NFL decision makers.

The Combine takes place every year in about the 3rd weekend in February. The goal of the combine is to extract every measurable possible on a player. Although the Combine is known for physical tests such as 40 times, short shuttles, the bench press and the vertical jump, interviews are a crucial part of the event as well. However, the head to toe probing physical may be the most important component of the weekend. The physical won’t increase a player’s draft value but can easily kill it. If a player is red flagged here by NFL team doctors, he can fall right off the draft board. The scary part about this is the player may never know he was red flagged until draft day. 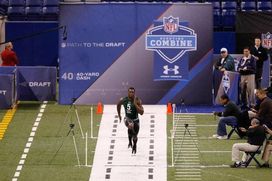 Taylor Mays faces just one of many physical tests of the NFL Combine.

The agent’s role: For one, agents are not allowed in the Combine even though we most likely flipped the bill for the player’s Combine training. However, agents will be out and about pressing NFL teams for info on their clients and doing what they can to promote them. The agents have little access to their players but can meet them in their hotel lobby to get them anything they may need. Agents may also set up meetings for their clients with sponsor companies like Nike, Reebok or Under Armor. The most important thing an agent can do at this point is keep their client loose and confident.

The same exact drills that were performed at the combine will be performed again in front of scouts on every college campus. The purpose of the pro day is to collect measurables from those who didn’t receive a Combine invitation and those who didn’t perform at the Combine but were invited. Sometimes, prospects will defer working out (usually advised by their agents do to so) at the combine and wait to perform the drills at the familiar confines of their own college facility.

In addition to combine drills, the college pro day offers a chance for scouts and NFL coaches to work out prospects for position specific drills. These workouts are intense and can take up to two hours per position.

The agent’s role: The agent will advise the client on which combine drills to re-do and possibly which team to interview with after the workout. The pro day is usually ran by the college strength coach, in conjunction with one or two NFL scouts. Some schools close these workouts to agents and everyone else while others have opened them up to the world.

NFL teams also have one-on-one workouts with some of the top 120 prospects at the player’s campus. Teams will send a coach or scout to work out a specific player to get a closer look at their skill set and see how coachable they may be.

The agent’s role: Since there can be 20 or more requests for an individual workout, it’s the agent’s job to choreograph and prioritize them for their client so the player is not overwhelmed or worn out. Since many of these workouts are wedged between the pro day and April 1st, agents will consolidate and manage the workouts based on what he or she thinks may be the best teams for their client.

The visit and/or Combine recheck

Each NFL team is allowed to bring players in for interviews at their team facility. The purpose of the visit is to get one more medical check or one last look at a prospect before the draft. The goal of the Combine recheck is to get an update and/or see how a player may have progressed from an injury documented earlier at the Combine.

The agent’s role: Organize team visits and prep the client for the visit.

As you can imagine, spring is a stressful and intense time for NFL draftees and it’s the agent’s job to relieve that stress and make certain that things run smoothly through the gauntlet of practices, test, workouts, physicals and interviews. In addition, we must also make sure that accurate expectations are met on draft day and prepare the client for a worst-case scenario while making sure they can also enjoy a best-case outcome.