The next CBA adjustments

There is unseen pressure already mounting beneath the surface of the NFL’s collective bargaining agreement with its players. Unlike the eruption of Mt. Vesuvius that caught the residents of Pompeii off guard and literally fried them in their tracks, this eruption will be a slow, steady, and painful build-up.

In my 27 years as an agent, it’s the first time I’ve witnessed the players, the agents and the media talk, debate, criticize and even plan for the next negotiation so far in advance of the CBA expiration in 2020.

Let’s concede that the first issue in any major sports league negotiation will always be the revenue share equation. That’s a given! As the designated gross revenues balloon skyward, there is no doubt that the battle for each percentage point will intensify on the next negotiation. However the way things are going now I do believe the players will want to manipulate how those dollars are distributed.

The $25 million dollar per year QB is just about here. It’s safe to say when the next group of young guns comes due, they will push the $25 mil mark and then some. The current make up of the distribution of cap dollars is gravitating toward a two-tiered system. On one tier, about 5 players per team getting huge contracts, while the rest of the roster will all be at the minimum. I don’t think anybody saw this coming.

For a team sport such as football this seems unfair. The middle linebacker, running backs, guards, safeties and tight ends who aren’t getting paid as much as other positions are taking the same if not more risk with their bodies than the offensive tackles, corners, and defensive ends that are getting the mega deals. It’s trending as if the rank and file over 28 year old player is getting the short end of the proverbial stick under the current CBA. This isn’t the owners’ fault and most likely wasn’t even a part of their blue print. It just evolved because of the new way draft picks now get paid, the vested vet allocation cap requirements and limited tools available to negotiate contracts. 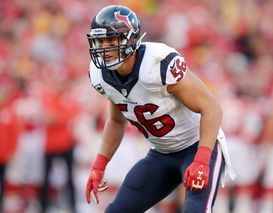 Cushing now has to hold his breath to collect the entire guaranteed portion of his contract.

Guaranteed monies: Players still have a ways to go to catch up to other leagues when it comes to getting their contracts, or a portion thereof, guaranteed. Having a contract guaranteed against just injury is not really a guaranteed contract. The funding and language of the guaranteed portions of the contract strongly favor the owners/teams. The actual funding (escrowing) of a guaranteed component of a contract is for the most part, non-existent. The player assumes all the risk in waiting to receive the unpaid guaranteed dollars, while the owners hold on to it until earned and paid.

When we had big signing bonuses being handed out, the owners would have to file a grievance against the players to get them back if they felt the player breached the contract. In those instances, they were rarely successful in winning them and collecting the monies.

So much more needs to be addressed in this area. Players literally risk their lives and general health playing the game so they should have the peace of mind of guaranteed contracts.

Maybe a percentage of each teams payroll should be guaranteed.

Less restrictions/years to contract terms: It wasn’t by design or intention but the negotiators of the last CBA made draft picks so cheap and attractive, teams are opting to keep younger players over veterans. As one GM put it to me, “when we have an internal debate between keeping a vested veteran versus a young rookie, the economics (salary and liabilities) always seems to be the deciding factor in favor of keeping the younger player. This is great for players in their first 4 years but hurts players in years 5 and beyond.

So how do we balance the playing field? This is a tough one actually. We can make rookie contracts less attractive. For one, any rookie drafted in the 2nd through 7th rounds should not have a contract longer than 3 years. For first rounders, the contract limit should be four years. Secondly, lets get rid of the restricted free agent tender and the escalator year as well. Since the advent of the tender there have only been a few teams to make offers. It just gives the team a right to the player at a number that is usually way below the players’ open market value. This will force teams to make early long-term contractual commitments on young players and give them a chance to earn more money sooner in their careers.

A player is really lucky if he can play eight to ten years of pro football. To have draft picks (especially 2nd to 7th rounders) who become premium players locked up for several years under a rookie deal is just not fair. That’s usually half their career. Having shorter-term rookie contracts creates a more efficient market place for all players.

Elimination of the franchise tag, transition tag: This thing has to go! Why should each teams most premium player be singled out and have a fixed one year deal. It’s a tool that allows a team to keep their best player at a discounted price. Additionally, the tag comes with resentment and when used can be the beginning of the end for most player/team relationships. The bottom line is that the tag is a controlling tool that favors the owners, not the player and restricts the market place from becoming efficient.

In theory, Andrew Luck can belong to the Colts for eight years (at a price) if they used the franchise tag on him three straight years after his rookie contract expires. That’s eight years folks, most likely half of his career.

Injured reserved rules need a complete overhaul: Why should a player who is injured be forced to sit out an entire season if he can play in 12, 10, 6 or even just 2 games? It’s truly an insult to injury. These rules are unfair to players, owners and fans. The new designated short term IR rule is a small step in the right direction because it gives team flexibility on bringing back just one player. However, more tools are needed to manage all injured players.

Furthermore, injured players should have the right to rehab wherever is best for them. NFL trainers are really good but they just don’t have the time and resources needed to handle all the injured players. A player can improve his chances of returning sooner when he is with dedicated rehab and performance trainers.

Injury settlement procedures and language: Under the current system, an agent and salary cap admin are forced to play doctor under the current system. We both have to try to predict and forecast the recovery time of players based on opinions by team physicians, trainers, and second opinion doctors who the player has seen just once for less than 30 minutes. That’s if he sees him at all (they usually just see the MRI or x-ray). There are a lot of black holes in this current system. Players often waive rights to workers compensation when signing these settlements. Players have to realize that their careers will mostly end due to one or two specific injuries.

For players, it’s never too early to start identifying and talking about the issues. After all, we are going to be hearing more about them soon as those vying to be the next leader of the NFLPA will be flinging them around.