Like a lot of team personnel around the NFL, I am still buzzing about the king’s ransom paid to the Cincinnati Bengals by the Oakland Raiders to obtain the services of Carson Palmer, a player who was retired two days ago. A lot has been discussed about this trade but there are continuing angles to cover about this from an organizational perspective.

Raiders head coach Hue Jackson has claimed only a limited involvement in the trade, saying that he is only the coach and not the general manager. Well, uh, no. Jackson’s fingerprints are all over this trade, from knowing Palmer in the past to pushing through a transaction that is all about the present and throws caution to the wind about the future.

The Raiders lack a general manager and that was apparent through this deal. A general manager’s role is to protect not only the immediate interests of the team but also its future and prospects for sustained success. Were a general manager in place, he would have cautioned Jackson about this move or, at the least, pulled the reins and applied the brakes when the price for acquiring Palmer escalated.

When I was vice president with the Packers, a big part of what I did was act as a fulcrum point between the football side and the management side of the organization. Sometimes I was the voice of aggression, asking the business side to support a more aggressive posture in acquiring players. At other times I was the voice of reason and caution, slowing down the immediacy of the football needs to have a longer term look at things.

The Raiders’ acquisition of Palmer screams out as a move all about the here and now and all about a coach’s best interests. Coaches don’t worry about 2012 or 2013; they worry about the next practice, the next game and more importantly to them, the next contract. And that contract will be based on wins and losses. Palmer, according to Jackson, can provide some short-term wins. That was his focus.

The Raiders have mortgaged their 2012 Draft, with only a couple of low-round draft picks left. The last team to operate in a similar fashion was the Redskins several years ago, which didn't exactly work out well. 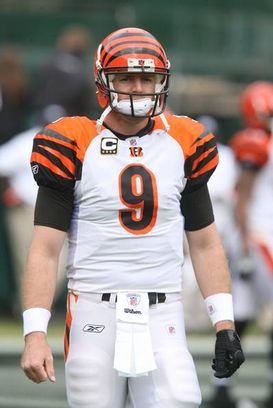 ICONPalmer is scheduled to make $43 million over the next four years.

Bengals quarterback Andy Dalton is making $5.2 million over the next four years. As for the future draft picks, let’s assume the Raiders’ pick is between picks 20 and 24 next year. That will cost the Bengals approximately $8 million over four years. Even assuming a similar cost for the 2013 pick, the value for the Bengals is many times that for the Raiders.

With the new CBA drastically reducing the financial obligation for top picks, these selections have become more valuable than ever. To put it into greater perspective, the Raiders will pay Carson Palmer about twice what Andrew Luck will make over a four-year time frame.

As I have said, Mike Brown played the Carson Palmer “retirement” as well as it could be played. Palmer was never going to contribute again to the Bengals; the only question was what, if any, value that the team could extract from the situation. And then the perfect storm of events happened in Oakland: Jason Campbell suffered a season-ending injury, the coaching staff lacked confidence in Kyle Boller, and Terrelle Pryor was subject to a suspension that prevented him from assimilating the offense to the point of handing the team to him. And, of course, the Raiders were a team willing to “do what it takes” to make a splash in this situation.

Most general managers in the NFL value first and second-round draft picks like gold. Regardless of the opinion of Carson Palmer as a player – although most management I have talked to see him as a declining, not ascending player – it is difficult to think of another team that would make this trade. Can you imagine a general manager such as Ted Thompson or Bill Belichick trading these picks for any player? I cannot.

Yes, I know there are some who like the move for the Raiders, solidifying their most important position in a year in which they have experienced some early success. And this trade may look like a positive move in the coming weeks and months.

But let’s fast forward to 2014 and this likely scenario: Palmer is either a declining player with a high salary or perhaps even no longer with the team. Dalton is reaching his prime and two valuable assets – a first-round pick from 2012 and a first or second-round pick in 2013 – are becoming key contributors for the Bengals and under contract for years at low salaries.

Carson Palmer is the Raiders’ hope for the present and – whether he is there or not – future as well. The future is now for the head coach-dominated Raiders.