What goes into interviews for NFL head coaches and how long does the interview usually take? --Sam P.

Good question for this time of firing and hiring of NFL head coaches. With qualifications and credentials established before the meeting, an obvious factor is chemistry and comfort level between the decision maker and the coach. 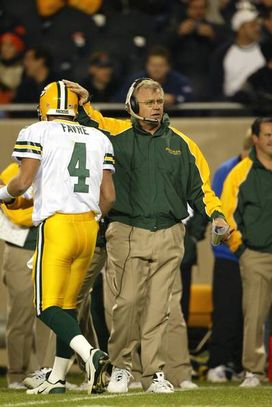 I was around a couple of coaching changes in Green Bay, both in 2000 and 2006. In 2000, in interviewing a relative unknown that Mike Holmgren recommended from his staff in Seattle, Mike Sherman, I saw a long shot candidate become the head coach due to a striking interview.

Sherman came in to interview with general manager Ron Wolf with a binder outlining a detailed schedule for the next 52 weeks. He detailed his offensive play calling and philosophies on attacking defenses. He detailed biographies of the assistant coaches he planned to hire. As Ron said, he “blew our socks off“ with his copious preparation and attention to detail.

I was on the phone with the agent for Marty Schottenheimer, also a candidate although lukewarm about returning at that point (he came back a year later to the Redskins) when Ron gave me the throat-slash sign to cut off talks. Sherman was the guy.

A key player in football at this time of year is agent Bob LaMonte (he was Sherman’s agent). LaMonte is skilled at creating the perception – real or manufactured – that one or more of his clients are the “hot guy” that a team should sign before it’s too late (an example was Brad Childress with the Vikings in 2006).

LaMonte also is strategic in attempting to have clients work together in the same organization. For example, in Cleveland president Mike Holmgren and general manager Tom Heckert are LaMonte clients and there is a reasonable chance the next head coach may be as well (LaMonte clients Pat Shurmur and Marty Mornhinweg have been linked to the job).

LaMonte’s current crop of clients in and out of head coaching positions includes Shurmur, Mornhinweg, John Fox, Jim Mora, Leslie Frazier, Charlie Weis, Josh McDaniels and Jon Gruden. Of course, many factors go into interviews beyond chemistry and preparation – including the Rooney Rule – but those two factors go a long way in the process.

You’ve talked about your relationship with Matt Hasselbeck; he sure looked good this weekend, but will he continue to play that well? --Steve B.

Admittedly, my views on Matt are clouded by personal bias. He was my client when I was an agent; he was my neighbor when we were in Green Bay together; and our families are good friends.

Matt did not get and invite to the Combine and his agent (me) was unable to change that. I organized a private workout at Boston College and invited every NFL team to attend. One guy showed up: Andy Reid, quarterbacks coach for the Packers.

I picked up Reid at the airport to bring him to the workout. I had never seen Reid, so I did some reshuffling in my small car to stuff him into the passenger seat.

Reid had Matt rated not far behind Peyton Manning and Ryan Leaf. I told Matt that if he was to get drafted, it was likely going to the Packers (it was in the 6th round, behind quarterbacks such as Leaf, Jonathan Quinn, and John Dutton).

It was great to see Matt perform at that level on a big stage. Can he continue? Absolutely. He’s been in the Super Bowl (and played well in it) and other big stages before.

Hidden in the Pacific Northwest, not exactly a football Mecca (Matt said that in his first year there he was more recognized by Packer fans than Seahawk fans), the viewing public will now see perhaps the most engaging, humorous and self-deprecating interview in the NFL.

With all your time with the Packers and now living in Philadelphia and having consulted with the Eagles, how was it for you watching that game this weekend? --Jesse W.

There were lots of mixed emotions, although I did feel the Packers would win. I thought the Eagles would have more success against all other NFC playoff teams, especially Atlanta, who I saw them beat handily this season with Kevin Kolb at quarterback. Watching pre-game warm-ups, the size difference between the teams was noticeable, the Packers being the bigger group. The Packers are not as fast as the Eagles, but they have enough speed to go with their size.

Unlike sitting in a sterile box for so many years in the front office, I was able to enjoy this in the stands with my son. He insisted on wearing a Packer hat and heard some choice language about it, a new experience for him having been used to the affability of Packer fans to visitors (I used to see opposing fans at my neighbors’ house after a game; they had met in the stands and were invited over for dinner).

Both the Packers and Eagles have had sustained success for a while now and I think they will continue to do so.

What went on with that contract for Nnamdi Asomugha with the Raiders? Can you explain? --Nick R.

Yes, but it’s complicated. I’ll take you inside that deal in an analysis tomorrow.