You know Brett. What do you think of these allegations and what will the NFL do about it?

First of all, I heard some compare Brett's speech apologizing for causing a distraction to the Vikings to the speech he gave in Oakland on the day he learned his father passed away (I got the first call from Bus Cook and we found Brett on the golf course with Ryan Longwell and Doug Pederson). The raw emotion Brett showed that day pulled the heart strings of everyone associated with the team; there was not a dry eye in the room. I have no idea what Brett said to the Viking team yesterday, but these situations are not comparable.

As to the allegations, I certainly know Brett is no Saint, but my view of him in my time in Green Bay was of a guy that had left that behavior in his rear view mirror.

It was certainly known that Brett and his wife Deanna went through some challenges in their marriage. The “Three Amigos” – the nickname for the trio of Brett, Frank Winters and Mark Chmura -- reaped the reward of their celebrity from Milwaukee to Green Bay. As Deanna described in her book, she was, by 1999, exasperated with Brett and consulted divorce attorneys as the result of his behavior.

However, in the time I was around Brett in Green Bay -- 1999-2008 -- those days had subsided. My view of Brett was a clean and sober family man. I would see him at the facility late watching tape as he called himself the most boring guy on the team. The last images I recall of Brett around Lambeau were with his young daughter Breleigh watching their yappy little dog Charlie racing around the loading dock.

As to discipline, the league should and will investigate. In light of the recent ogling of the female reporter by the Jets last month and the fact that these allegations detail actions by -- at the time -- the Jets' most famous and highest-paid employee to independent contractor(s) to the team, the NFL has to take this seriously.

Commissioner Goodell will be best served to act sooner rather than later. I am sure that the moment Deadspin published the alleged conduct by Favre Goodell and his lieutenants cringed, especially after dealing with the sordid nature of the Roethlisberger allegations all summer. The longer this takes, the longer this remains as a blanket of fog over what could be the last football season for a while.

As to potential discipline, it is hard to envision a suspension for what has been reported. No player -- save Ben Roethlisberger -- has been suspended without being charged with a crime or arrested. As one player told me: “If guys get suspended for inappropriate texting and sexting, there won’t be many players left!”.

When a team like the Redskins cuts a high pick like they did with Devin Thomas, they must have tried hard to get something for him, no? 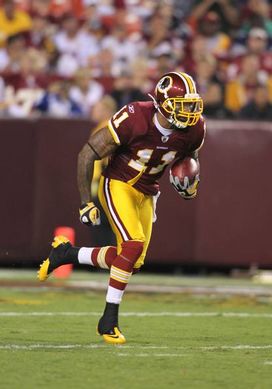 ICONThomas was released this weekend.

Yes. When you see a player like Thomas released, you have best believe that the team begged any team to take him off their hands for a bag of socks, just to make it look like they are getting something.

During this year’s Draft, the Titans traded one of their former 2nd round picks, LenDale White, for essentially nothing, the equivalent of a ham sandwich (which he ate).

Thomas was the third pick in the 2008 and received a signing bonus of $1.725 million, an option bonus in 2009 of $510,000, and a one-time incentive of $497,000 in addition to his salaries over two years and four games. Thomas has now been claimed by the Panthers, who only inherit minimum salaries for this year and next.

Thomas was one of several second-round receivers in tthat Draft, including Donnie Avery, Jordy Nelson, Eddie Royal, DeSean Jackson and another Redskin, Malcom Kelly, placed on injured reserve by the team on August 31. Another second-round receiver in that Draft, the Bills’ James Hardy, was also kicked to the curb like Thomas, he after receiving $2.4 million in guaranteed money, and still remains unsigned.

Is there anything to this collusion case that the NFLPA is reportedly going to file against the NFL based on the lack of activity this offseason?

Like everything else going on between the union and the league these days, any move that is made is part of a negotiating strategy. As The Washington Post reported, a collusion case may be forthcoming, a strategic method to make the point again that it is the owners, not the players, that would be responsible for a work stoppage (the owners are in Chicago meeting about those contingencies).

As to the merits of the case, although this year has been a depressed market, the reason for that stems more from the rules than from collusion.

As to unrestricted free agency, the requirement that a player must have six years of service to be unrestricted – rather than the previous four – diluted the group significantly, with the age and talent level of the group making them unattractive.

As to the restricted free agent group, where the grand total of players switching teams was one (Mike Bell from the Saints to the Eagles), teams will say that the offer sheet requirements to deter incumbent teams from matching were beyond their valuations of these players. Further, the 2010 Draft was thought to be strong and long, another factor in the lack of offer sheets. And many of the top RFAs – Jahri Evans of the Saints, Miles Austin of the Cowboys, Elvis Dumervil of the Broncos – did end up getting long-term extensions.

The potential collusion case is another salvo by the NFLPA to the NFL to say that as long as the league continues to negotiate aggressively, the union will continue its challenges on all fronts.