Appeal is over: instant analysis


Football's day in court has ended. The Eighth Circuit Court of Appeals kept the arguments and the schedule tight and stayed within the prescribed guidelines of a half hour each. Here are my thoughts:

Paul Clement -- the attorney arguing for the Owners -- hammered home the point that this dispute has been and continues to be a labor dispute, not an antitrust litigation. He maintained the Owners' position that has not changed since March 11th: this union cannot and did not decertify within hours from engaging in a collective bargaining session on that day. Clement brought home the key language from his brief, which is that the Players can't "flip the light switch" and play "Gotcha!" in going from labor to antitrust instantaneously.

Ted Olson -- the attorney arguing for the Players -- continued to advance the Players' argument that the Players are not and do not have to be a union and that no one can force a group of employees to be a union.
The two judges that have been favoring the Owners in the stay rulings -- Judges Colloton and Benton -- appeared to be empathetic to the Owners' argument. They asked many questions to Olson about the phrase "sufficiently distant in time and circumstances" that has been used in prior cases. The argument from the Owners is that the labor exemption for the Owners -- protecting them from antitrust law -- is lasting at least through now. Judge Benton tried to get Clement pinned down on a timeframe as to how long that would be; Clement, when pressed, said at least six months. 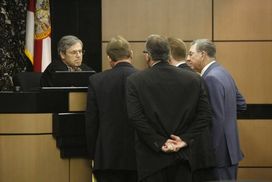 Clement expressed the Owners' clear annoyance that this matter has turned into an antitrust matter. He referred to the "labor tool" that the Owners have -- a lockout -- as the best way to encourage bargaining and an eventual CBA.

Olson reasserted the point that the union is dead and the Players made a clear choice. The Players chose to forego the protections from labor law to avail themselves of the advantages of antitrust law.

Clement spent most of his time expanding on the Owners' consistent argument that this Act clearly prevents injunctions being granted "arising out of labor disputes."

Just as the questioning of the Owners was more strident and aggressive by Judge Nelson in the lower court hearing, the converse was true today in the Eighth Circuit. The two judges who had sided with the Owners in the stay ruling seemed to be consistent in their questioning of Olson. The judge who sided with the Players -- Judge Bye -- was silent throughout except for closing remarks.

The show of support by more than 20 NFL players -- including Cullen Jenkins, whose contract I negotiated four years ago and is now a free agent -- was impressive and notable, although I don't think it will sway any of the judges.

If pressed to give an edge based on their presentations today, I would give it to Clement. He was able to make his arguments more expansively and expressively, primarily due to being interrupted less by the questioning.

We wait for a decision "in due course" and hope the sides heed Judge's Bye's closing remarks that the Court "wouldn't be hurt" if the parties settled this dispute themselves. Neither would any of us.