On August 4th, NFL Commissioner Roger Goodell and NFL Players Association (NFLPA) head DeMaurice Smith sat in front of television cameras and signed an historic 10-year Collective Bargaining Agreement (CBA). They preached about how a decade of labor peace will foster a new era of growth for the sport and how the tension between the league and the union was behind them, not to resurface again for a very long time.

Now less than 2 months later, it appears a crack in post-CBA solidarity has materialized, not only between players and the NFL but perhaps between players and their own union. The issues under review are: (1) the application of Commissioner discipline to conduct prior to entering the NFL; and (2) the application of the NFL’s Personal Conduct Policy to lockout conduct. 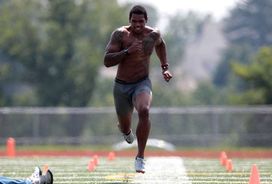 ICONPryor has been suspended from the Raiders the first three weeks.

Commissioner discipline has always been a hotbed issue; nowhere is that more apparent than in the Terrelle Pryor suspension. As we await a decision on this case dealing with a suspension of Pryor for activities prior to entry into the NFL, the legality of pre-employment discipline is at issue.

This case has been puzzling from the start. It first seemed that there would not be an appeal, which I questioned as Pryor should at least try to forge a settlement allowing return of some of the $110,000 he was losing and an ability to practice with the Raiders.

I always got the sense that the NFLPA was at odds with an appeal here. There appeared to be an unspoken alliance between Pryor, agent Drew Rosenhaus, the NFLPA and the NFL that Pryor would be allowed into the NFL’s Supplemental Draft as long as he accepted a five-game suspension as part of his entrance into the league.

Pryor’s outside attorney David Cornwell had other ideas and, with the consent of his client, filed an appeal on Pryor’s behalf. Cornwell, who was unfortunately dealing with serious health issues at the time, filed the appeal on August 25th from his hospital bed.

Also pushing for an appeal here were high-ranking members of the NFLPA executive committee. Although NFLPA lawyers represented Pryor at the hearing appeal, players have told me that Smith and the NFLPA were reluctant to bring this action. Pryor and Cornwell were spearheading the Pryor case; the union appeared to have joined the fight at a late date.

<p> We now await a decision on Pryor three games into his five-game suspension. I am told the that -- prior to the hearing -- the NFL relaxed some of the restrictions placed on Pryor's activities with the Raiders which may lessen the impact of th suspension.

A ruling on Pryor, though, will set an interesting precedent on discipline for incoming players and potential discipline for their actions in college. Some University of Miami players, as one example, are watching closely.

Although the NFL was insistent that the NFL Personal Conduct Policy (the Policy) would apply retroactively during the lockout, I believed that such enforcement would be difficult, especially considering that the NFLPA was vocal that Goodell had been overreaching in his conduct discipline in recent years.

A letter circulated on August 4th – the same day the new 10-year CBA was released – disclosed the names of eight players deemed "repeat offenders" and subject to discipline for misconduct during the lockout period of March 11th through August 3rd (the Period). Notably, the signatures of both NFL general counsel Jeff Pash and NFLPA executive director DeMaurice Smith appear at the bottom of the letter, that reads in part:

Although Talib and Britt had more serious criminal charges levied against them, Goodell chose to impose a three-game suspension on Benson, arrested for misdemeanor assault on July 17.

Return of the NLRB

Benson has filed a claim against both sides: (1) he appealed his NFL suspension right back to Commissioner Goodell, an appeal that will be heard today in New York and (2) he filed an unfair labor practice charge against his own union with the National Labor Relations Board (NLRB).

Regarding the appeal, Benson contends that as a free agent, he had no employment relationship with an NFL team and as such should not be subject to discipline. Regarding the NLRB charge, Benson contests the ability of the NFLPA – who decertified as a union on March 11th – to allow for discipline as it did in the August 4th letter.

While the NFL appeal should be resolved soon, Benson should not expect quick resolution on his claim against the union. As we have learned from other claims with the NLRB in both the NFL and now with the NBA, the agency moves at a slothful pace.

The NFLPA's legal woes continue, with Benson's charge coming on the heels of Carl Eller filing suit on behalf of retired players, claiming the NFLPA improperly negotiated retired player benefits without legal authority to do so. Even though football has returned to the playing field post-CBA, minor tremors of courtroom football linger.

The Pryor and Benson cases appear to involve players feeling sacrificed something beyond their individual case. And in both cases, there is question as to whether they are part of something bigger not only for the NFL but perhaps for the NFLPA as well.