First a note on this historic day and the death of Osama Bin Laden. My thoughts are immediately with those I know that lost loved ones, including an executive with the NFL who lost his wife. I remember that time vividly, as the Packers were scheduled to play a game that week against the Giants. Since Giants Stadium was being used as a morgue, we were readying to host the Giants instead before word came that the games would not be played that week. We then hosted the Redskins the following Monday night, with a heart wrenching opening ceremony, and made up our game with the Giants at the end of the season where we had a sobering tour of Ground Zero.

The tragedy of 9/11 has some relevance to the labor situation in the NFL. The leaders of the NFL and the NFLPA at that time, Paul Tagliabue and Gene Upshaw, both lost people that were close to them in the devastation. The event further cemented their relationship and led to the ease they had in working out agreements along the way. We can only hope that eventually the present labor unrest in the NFL will resolve the way it did under previous leadership whose relationship grew through this unfortunate tragedy.

Speaking of the lockout, we await the next “stay” ruling in Courtroom football – we are presently in the midst of a temporary stay that will probably not go past mid-week. Here was my analysis of the granting of the injunction by Judge Nelson, her denying its stay, and the Eight Circuit grant of the temporary stay.

While we await the next chapter of this saga, I offer thoughts on the 2011 NFL Draft, perhaps the last business of football we may have for a while.

The trade that wasn’t a trade

The Bears-Ravens entanglement points out the trade process required while on the clock: both teams must confirm to the NFL: otherwise, the trade is invalid.

Although the teams had agreed to a trade, a miscommunication among the Bears’ resulted in no confirmation for the trade before time expired. The Bears thus had no obligation to return any compensation to the Ravens.

Whether the Bears had an “ethical” obligation to compensate the Ravens is a different question. The Ravens will remember the incident in future dealings and there will be some icy stares across the table at the next NFL meeting.

During my time with the Packers, when we drafted players, especially in the first four rounds, I would ask, “Who does this push off the roster?” In every Draft, there are “signal” picks that indicate a team is “moving in a different direction.”

The Eagles drafted a kicker in the fourth round who, if paid like last year’s pick in the same slot, would make about $470,000, meaning the tenure of one of their most popular players, David Akers, is likely over.

The Bengals took Andy Dalton high in the Draft wanting to deal with Carson Palmer on their terms, not his. The Bengals have been through the annual offseason demands with Chad Ochocinco and may be immune to threats such as Palmer wanting to retire. The Bengals will put Palmer on the reserve/retired list, if that is what he wants, and move on. 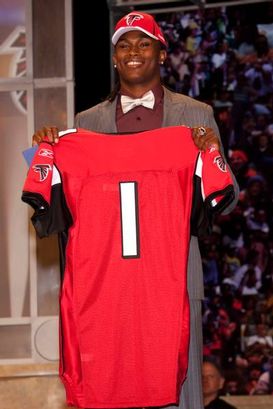 The Falcons went all in on Jones.

The Falcons looked like the old Redskins in mortgaging a part of the future for one player (and the new Redskins looked like the Patriots and Packers in turning picks into many). As to the trade up for Julio Jones, I believe that wide receiver is a position to not overpay for, whether for a veteran or a rookie. I understand the “threat” factor, but do not believe the value proposition in investing greatly in a player that touches the ball 6-10 times a game. I hope, for Atlanta's sake, that Jones proves me wrong.

Teams were business as usual preparing for the Draft. However, being unable to trade for players did change the dynamic of Draft preparation and implementation. And nowhere was the lockout that felt more than after the Draft.

Normally, in the two hours following the Draft, there is a frenzy of calling agents and players to fill out rosters while players and agents are calling teams to leverage what they can in a signing bonus. That did not happen Saturday, giving team personnel an unfamiliar feeling and keeping some 400 players from being signed.

I spent time with leadership from both the NFL and NFLPA. They both know this is a process is complicated and sometimes nasty but anticipated expected. I remain confident that we will not miss the start of the 2011 NFL season. Just don't ask me when we'll have a new CBA.

On Draft weekend, I always remember certain things. Before we would pick a player, Ron Wolf used to say "Get him on the phone and make sure he's still alive." They were always alive but sometimes we couldn’t find them. One time after no one answered the phone we were about to take another player when defensive end Mike Montgomery finally answered. He was literally a second away from not being a Packer.

And I remember that fateful day in 2005 when, with the 24th pick, were left with one name above our first round line: Aaron Rodgers. There was debate about taking him as we had the most durable quarterback in the history of football. Finally, I called Aaron and his agent, Mike Sullivan, and get him on the line. I then kept Aaron waiting another ten minutes -- he had already been waiting 6 hours in that lonely green room -- to see if we got an offer for that pick (we didn’t). I often think about how history would be different had any of those players we targeted hadn’t been taken or had we received an offer to move back.

What they say, what they mean

Finally, every general manager and coach says the same thing after the Draft, how excited they are with their picks, how they had them rated higher than they went, etc. Wouldn’t it be refreshing if a general manager or coach came out after the Draft and said, “The guys we targeted were gone, so we took some other guys. We hope they’ll do ok” or “In the later rounds we just took some guys to fill out the roster. They won’t make the team but will be good camp bodies.” Believe me, both statements are truer than you think.