There may be no player in the NFL who has maximized his earnings more than Cardinals wide receiver Larry Fitzgerald. As he signs one of the highest total value contracts -- $120 million -- in NFL history today, Fitzgerald has completed the trifecta of blockbuster contracts, with each contract bettering the standard he set in the prior one. Let’s examine:

As the third pick in the 2004 Draft, Fitzgerald's contract had $20 million guaranteed putting him at top wide receiver pay before he even started his career! Even more impactful, the contract – and many like it at the top such as between the Saints and Reggie Bush – featured easily earned escalators that juiced the contract to unworkable amounts for the Cardinals.

Due to these "exploding escalators" – incentives that trigger massive amounts for the player – Fitzgerald was slated to earned $14.6 million in 2008 and $17.4 million in 2009. The Cardinals had major Cap issues and no ability to sign free agents with these numbers on their books. In fact, some free agents – such as Brandon Chillar, who signed with the Packers – could not wait around for the team to sign Fitzgerald.

Fitzgerald, as he did as a top rookie, once again had substantial leverage with the Cardinals. Leading to... 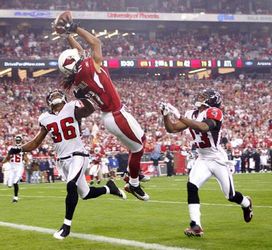 Here are some features of Fitzgerald's four-year, $40 million deal that separated it from all other contracts:

(1) It not only set a new standard for the wide receivers at $10 million Average Per Year (APY) but actually had an APY of $11 million with a three-year, $33 million deal prior to its renegotiation this weekend;

(2) It set a new standard for the wide receiver market in guaranteed money with 75% of the deal – $30 million – guaranteed;

(3) It contained a clause preventing the Cardinals from placing the Franchise tag on Fitzgerald at the conclusion of the deal;

(4) It contained a “no-trade” clause, one of only two I have seen in the NFL, the other being that of Andre Carter and the Redskins; and perhaps most importantly

(5) It allowed Fitzgerald to have another bite at the free agency apple three years later – the Cardinals would certainly negotiate again before the last year of the deal – while still in the prime earning age (he turns 28 on August 31!).

Agent Eugene Parker – as I know from my many dealings with him – loves shorter deals for star players, as he knows the value of having not one, but two free agent contracts. Another top wide receiver and Parker client, Greg Jennings, negotiated a four-year length with the Packers in 2009 and will certainly have another turn at a big contract after this one.

After that blockbuster deal, the stage was set for this one. Cardinals general manager Rod Graves and owner Michael Bidwell were clear about their priority in signing Fitzgerald: negotiations began before the lockout and recently concluded, with a sincere commitment to make Fitzgerald the face of the franchise. And what a commitment it was...

The Cardinals gave Parker and Fitzgerald great reason to not worry about having a shorter deal. Here are some features:

Similar to Chris Johnson's haggling with the Titans, the argument for Fitzgerald was that he should be one of the highest paid non-quarterbacks in the NFL, regardless of position. And similar to the Titans, the Cardinals were always willing to go past the positional market; the question was by how much.

Parker used a recent under-the-radar negotiation he had to bolster his case. Before the lockout, Parker negotiated a deal for Richard Seymour with the Raiders for two years, $30 million, with $22.5 million fully guaranteed and the rest guaranteed for injury. This was a $15 million APY for a non-quarterback. Parker argued that while other agents could point to deals done by other teams and agents, here was a deal done by the same agent at the $15 million mark for a non-quarterback (and 31 years old).

The Cardinals resisted but eventually gave Fitzgerald what he wanted. Parker and Fitzgerald worked with Michael Bidwell on the cash flow issue, not requiring the major upfront cash payments that some contracts have required. And, as described above, they allowed the Cardinals the ability to not have to fund the guarantees at the outset by having them kick in February of the applicable year.

And a final note on this deal: one of the agents involved in helping Parker and Fitzgerald was a man named Paul Lawrence. Lawrence was a tireless worker and supporter of all of his clients; I saw that firsthand in m y dealings with him. Lawrence died unexpectedly earlier this year of a heart attack. I am sure that Lawrence is in Fitzgerald's thoughts, as he is with all the clients he worked with.

Once again, Larry Fitzgerald has maximized his earnings with the Cardinals. With an eight-year deal ahead, it is doubtful there will be a Perfect Storm, Part IV. For Fitzgerald, though, three deals were enough.

And yes, Chris Johnson, DeSean Jackson, Vincent Jackson, Andre Johnson, Adrian Peterson and players at other positions are watching, as a new metric for negotiations has entered the fray: "top non-quarterback money". General managers better get used to this phrase....