Last week the Eighth Circuit Court of Appeals (the Court) granted the NFL its wish in keeping the lockout intact through the appeal process. The Court’s 2-1 opinion gave a harsh rebuke of the lower court opinion by Judge Nelson, especially her reading of a law named the Norris-LaGuardia Act (the Act), a statute that has become a focal point of Courtroom football in the NFL.

Since then I have received scores of questions asking in different forms the following: "How can two courts interpret the Norris-LaGuardia Act in two completely different ways?" Welcome to the law. 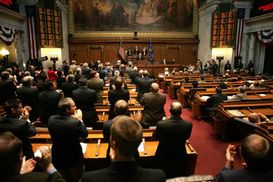 iconPolitics has a role in opinions but it is more than that.

One theory is that judicial political ideologies are lurking. Judges Benton and Colloton – ruling in favor of blocking the lockout – are Republican appointees. Judges Nelson and Bye – those in strongest opposition of the stay – are Democratic appointees. Party politics may have some influence, but it is certainly not all that is shaping these judges' viewpoints.

Perhaps more influential here is the interpretive stylings of the judges involved. Here is background on the ways in which judges think.

One trend in legal jurisprudence is “plain meaning”: to read the text and take it simply at its face value. Judges examine the explicit language in question without consideration of elements outside the bounds of the actual text. Plain meaning is utilized most frequently in interpreting legally-binding documents such as contracts and wills.

On its face, the Act prohibits a federal court from issuing an injunction in any matter "involving or growing out of a labor dispute."

In ruling for the Owners, Judges Benton and Colloton applied a broad interpretation of the above phrase. Cognizant of the fact that the NFLPA decertified only hours after attending a collective bargaining session, they rejected the Players' argument that decertification took the matter out of the realm of a labor dispute. To guide their interpretation, the two judges relied on additional language in the Act stating that a labor dispute may involve an employer and "one or more employees or associations of employees." Thus, for Judges Benton and Colloton, the fact that no union exists does not mean that the Act is irrelevant here.

Another interpretive technique used by judges relies on examining the legislative intent and purpose behind a statute. Beyond the wording of the statute itself, there are often distinct public policy reasons that guide Congress when passing a law. When interpreting laws, the judiciary is typically mindful of Congress's intent and the underlying purposes that the laws are meant to achieve.

The Act was enacted during the Great Depression to protect employees by prohibiting the federal courts from blocking employee strikes. Realizing that the NFL's argument turns the Act completely on its head, Judges Nelson and Bye – both in favor of the injunction blocking the lockout – focus on the rationale behind the Act and are unwilling to extend it to cover employer lockouts.

Further, these two judges do not see this matter as a "labor dispute," saying the collective bargaining relationship ended immediately upon the NFLPA's decertification. For Judge Nelson and Judge Bye, the Act is irrelevant to the litigation.

Challenges for the Players

The Players have significant obstacles on appeal. In extending the lockout, Judges Benton and Colloton tipped their hand in stating “we have considerable doubt" about Judge Nelson's interpretation of the Act. Needless to say, this language does not bode well for the Players.

The Players' must convince Benton and Colloton that their interpretation is flawed, and provide enough case law and persuasion to demonstrate that the Act does not apply here.

Of some comfort to the Players is the fact that the Owners – and the majority opinion – only emphasize one case, New Negro Alliance v. Sanitary Grocery, in support of their position. Curiously, this case did not involve a labor dispute or a lockout. The Players thus have a slight opening to work with.

On Friday, the Players filed their brief to the Court. From the 125-page filing, here are the key themes:

• The NFL's analysis of the Act is "novel, unprecedented, and contrary to both the text and the purpose."
• Players "are aware of no decision ever holding that lockouts fall within the 'no injunction zone' "
• The First, Seventh, and Ninth Circuits have held that the Act "does not apply to employer conduct at all."
• In Mackey v. NFL the Eighth Circuit rejected the NFL’s argument that the Act barred an injunction against restraints in the player market.

All potentially compelling arguments, but fighting an uphill battle based on the majority opinion earlier.

Challenges for the Owners

Although the Court agreed with their interpretation, the NFL's argument flips the Act to apply to lockouts. The Owners' attorneys must continue to emphasize that the Act evenhandedly prevents federal courts from interfering in both strikes and lockouts.

While the two judges are currently aligned 2-1 in favor of the Owners, if one switches sides the entire dynamic of the appeal – and the short-term future of the NFL – could change. The Owners’ mission is to ensure that this does not happen.

This is what we have come to in the NFL: forecasting and handicapping how a couple of judges may or may not rule following a June 3rd hearing. In other years, we would be discussing free agency and players being released following June 1 due to Salary Cap ramifications. Now we have no June 1 rule (only a June 3 appellate hearing), no Salary Cap, no free agency and no NFL.