The difference between guaranteed amounts of NBA and NFL contracts is on stark display recently with new contracts for the NBA players Mike Conley, Joakim Noah and Al Horford. Conley re-upped with the Grizzlies for $45 million over five years; Noah and Horford did the same five years with the Bulls and Hawks for $60 million each.

The Grizzlies and Hawks are not exactly the biggest spending teams in the NBA yet, in addition to the above contracts, they spent $80 million on Rudy Gay and $120 million on Joe Johnson, respectively, earlier this year. 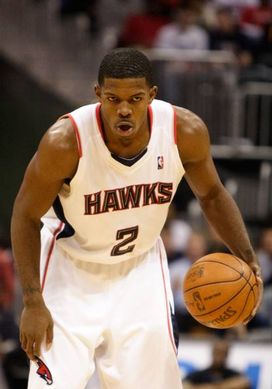 ICONJohnson's contract is worth more than many NFL payrolls this year.

If these were NFL contracts, we would expect the above contract descriptions to continue with the amount of guaranteed money in the deal. In the NBA, however, that extra language is not part of the discussion. These deals are fully guaranteed from the moment of signing by the player.

To put it into context, Noah and Horford make $10 million more in guaranteed money than any NFL player and Conley makes more than all but the Draft’s top pick Sam Bradford, probably the last player in that position to receive an exorbitant guaranteed sum ($50 million). Johnson’s contract may end up being worth more than half the NFL team payrolls this season.

I get the fact that there are far fewer players in the NBA, but the difference in these contracts is striking. And the average salary for NBA players is approximately $2 million more than that of NFL players, around $3.85 million to $1.85 million.

As much as we bemoan the money paid to some NFL players, NFL deals are all management-friendly in comparison to NBA contracts, especially in the all-important category of guarantees.

The 2010 contract of Randy Moss has been passed around among three teams (so far) this season. This year represents the third and final year of the $27 million Patriots contract Moss signed in 2008 and he is halfway through the last year, a year with a salary of $6.4 million.

Moss has made $1.5 million – the prorated amount for four weeks – from both the Patriots and Vikings and is now scheduled to make $3.4 million for the rest of the season, presumably from the Titans.

Of course, the Titans can release Moss at any time, only paying the weekly amounts of $376,000 but are now the team responsible for termination pay should Moss be released and unclaimed.

To wit, the Vikings owe the Titans a nice Christmas gift, as claiming Moss – they were the only team to do so – removed the $3.4 million termination pay liability of the Vikings. That helps a team that agreed to adjust Brett Favre’s contract upwards by $3 million and still owes $13 million on the recently extended contract of head coach Brad Childress. For a low revenue team in an outdated facility, the Vikings will take the Titans' gift.

One final note on Moss: what seems lost in his getting cut is that one of the great talents in the NFL has now been kicked to the curb for the 4th time in his pro career (six including college, counting Florida State and Notre Dame), yet seems to receive little blame in the process, excused by many due to his prodigious talent. As one team executive told me, it’s like Randy gets a “Manny being Manny”-type free pass; it’s just “Randy being Randy.”

Even Brett Favre couldn’t save Moss in Minnesota.

The Bills also rescued a team from a major liability when Shawne Merriman was claimed on waivers from the Chargers. Merriman was playing on his one-year tender of $3.27 million and had been paid $1.54 million by the Chargers for the first eight weeks of the season. Had he not been claimed, the Chargers would have been on the hook for the remaining $1.73 million, now assumed by the Bills for the remaining nine weeks of the season.

As mentioned previously, the Chargers are the NFL team most advantaged by the 2010 rules that extended the free agency requirement from four to six years. Instead of potentially bidding for the services of players such as Merriman, Vincent Jackson, Marcus McNeill, Darren Sproles and Malcolm Floyd, they held their rights. Now, there is a decent chance that only McNeill is on the roster in 2011.