First, here is the story I wrote earlier on Packers' coach Joe Philbin and the loss of he and his wife Diane's son, a loss that permeates over Packer Nation and the team as it prepares for Sunday. This is quite a time.

Sunday’s playoff game between the Packers and Giants at Lambeau Field evokes vivid memories of January 20, 2008 at the same venue when the same two teams played for the NFC Championship and the right to play the Patriots in the Super Bowl two weeks later. It was a game -- and state of frigidity -- that I will never forget. 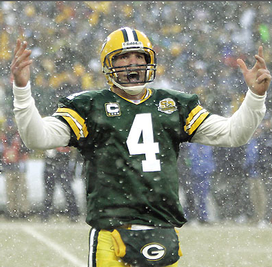 We had defeated the Seahawks in the snow to advance to host the Giants.

The fact that we were hosting the game in Green Bay was a great surprise to begin with, something unexpected but certainly welcomed. After defeating the Seahawks the week before with thick, luscious snow flakes falling (we dubbed it the “Snow Globe game") we fully expected to be playing the NFL championship game in Dallas against the top-seeded Cowboys and were preparing to do so as the Giants started playing the Cowboys the day after our game. We were to stay in the same hotel with the same setup and transportation as we had two months prior when playing the Cowboys in late November --the game in which Aaron Rodgers received his first true NFL action.

Then, of course, the Giants continued their amazing road run through the playoffs and upset the heavily favored Cowboys meaning, yes, we would actually host the championship game!

Unlike this year, immediately the weather forecast became the story: bitter subzero temperatures for a game to be played at night in late January in northeastern Wisconsin (actual temperature at kickoff was -1 degree Fahrenheit). As an aside, I have always found resistance to a cold weather Super Bowl to be curious considering the fact that the games immediately preceding the Super Bowl can be played in frigid conditions (as they were in 2008 in Foxboro and Green Bay).

Calls were coming in from all corners to attend the game. Richard Lovett -- president of Hollywood mega-firm CAA who is a Milwaukee native and diehard Packer fan -- and his group hung out in my office before the game, as excited as any fans could be. Comedian and actor Rob Schneider, another huge Packer fan, was also at the game and soaking up the atmosphere.

And then, early in the week, I was contacted by a friend in Washington, D.C. that another guest was coming: the Chief Justice of the United States Supreme Court, John Roberts (although a serious Bears fan, we allowed him to come anyway:).

I was going to work hard to try to accommodate the Chief Justice as much as possible. However, I soon realized that I was in a league far beyond my pay grade and that I should step away.

When I asked the contact about whether there would be security needs while I gave the Chief Justice a tour of Lambeau Field, the answer back was simple and clear: “It’s taken care of.”

“How about if he wants to meet some players after the game?” “It’s taken care of.”

“What if he’d like to move around during the game?” “It’s taken care of.”

Translation: "Back off, football guy, you don’t know what you’re dealing with here.”

The Chief Justice and his detail rolled up in a fleet of black Escalades a couple of hours before the game and we ushered them in. He loved the atmosphere and wandered through the crowd, surrounded at all times by security that blended into the Cheeseheads but had their eyes trained on Roberts the entire time. These guys were good. I soon found out what was meant when they said, “It’s taken care of.”