Haynesworth and Suh: size and leverage

Albert Haynesworth has certainly become the 2010 NFL poster child for what is wrong with NFL free agency (and to some, what is wrong with pro athletes in general). NFL owners need no charts, graphs or speeches about the dangers lurking in handing over massive guaranteed money to free agents; they have the Haynesworth scenario right in front of them as Exhibit A.

It has been vogue this offseason to criticize Haynesworth – I have been part of that caravan -- especially now that he has been failing conditioning tests with the Redskins. However, as we enter Day Six of his conditioning test nightmare, I think it’s time to leave Albert alone.

I was in Washington this week and read and listened to the Redskins coverage. It was 95% Haynesworth and 100% negative. Was I dreaming in April or did the Redskins actually acquire Donovan McNabb? Never heard his name.

Haynesworth has banked a ton of money from the Redskins, $32 million to be exact. We get it. He’s not – nor ever has been -- the most conditioned athlete. We get it. He failed to show up for the “voluntary” workouts where he inexplicably did not have a financial bonus incentive to do so. We get it. He tends to take plays off – again, nothing new to his career since he arrived in Washington. Ok, we get it.

Enough. The Redskins lost all leverage with Haynesworth on April 1 when they wrote him a check for $21 million after desperately trying to trade that obligation. Now they are making him sit in a very public corner in an extended time out while Redskin Nation watches and waves its collective finger at Fat Albert.

Mike Shanahan and Bruce Allen weren’t employed by the Redskins when the team gave Haynesworth a front-loaded, one-sided contract eighteen months ago. But now – as much as they would have liked to move him -- they are stuck with the contract and the player. And since they can’t take his money, they are testing his will. Albert still has the leverage; he has cashed the checks, and the money is probably spent.

Unfortunately for the Redskins, there are no mulligans in NFL free agency.

Hopefully, this strained marriage of convenience will work and this public humiliation of Haynesworth will be a distant memory come September. 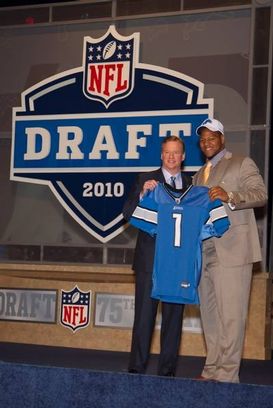 ICONSuh won't pass Bradford in guarantee but may surpass his teammate Stafford.

Speaking of defensive tackles that are – or about to be – overpaid, the public relations strategy of Eugene Parker and Roosevelt Barnes, the agents for Ndamukong Suh, the second pick in the Draft, has been clever.

After the monster deal for Sam Bradford, who will now become the latest poster child for what is wrong with rookie compensation in the NFL, there were rumblings afoot that Suh’s deal would try to surpass that magical $50 million mark set by Bradford.

Of course, there would be no basis for that, with longstanding traditions that (a) the first pick in the Draft makes more than every other pick; and (b) there is a “quarterback premium” especially high in the Draft.

Parker and Barnes backed off the idea soon after floating it, conceding that it won’t happen. In doing so, Suh will look reasonable in taking in “only” a guarantee of between $40-45 million, perhaps surpassing his teammate Matthew Stafford as the second highest guaranteed contract in the history of the Draft.

Suh will sign soon (Suhn?) and the money will be huge. However, compared to what had been out there about a possible Bradford-besting deal, it will look, well, within limits if not reasonable.