Many believe the following standard line about deal making: “It’s not personal; it’s business.” While I understand the sentiment, in 25 years of doing – and now covering – sports negotiations from both sides of the table, I have learned that it’s always personal.

The Chris Paul saga, with the NBA and Commissioner David Stern having nixed proposed trades to the Lakers and the Clippers is, at its core, a power struggle. The jockeying for control is a microcosm of what the NFL and the NBA have been fighting for in arduous collective bargaining over the past year.

After the summer of LeBron and the winter of Carmelo, Stern seems intent -- while as caretaker of the New Orleans Hornets -- to reign in the leverage of the superstars, something the newly-signed CBA evidently does not do.

Even with Stern's power play, Paul still has the leverage, despite this momentary hitch in his plans. No matter what happens now, Paul is not going to remain with the Hornets long-term.

The NFL structure is more resistant to power plays, for several reasons. 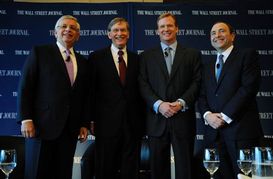 ICONGoodell's league has more control over stars than Stern's, for many reasons.

The NFL – through mutual agreement of its forefathers – has the most equitable revenue sharing system of the major sports leagues. Billions of television dollars are shared equally, meaning that the Packers (city population: 100,000) receive the same amount as the Giants and Jets (city population: 8 million). With the largest revenue source equally shared, there is less opportunity for “super teams” developing and for superstars holding teams hostage.

This is not to say that all NFL markets are created equal – some teams gross over $300 million while others barely reach $200 million. However, NFL teams that spend liberally one year usually fall back the next, with a harder Cap than the NBA acting as a self-regulator over time.

Unlike the NBA, there is less opportunity for one player to have an impact on the overall game. The MVP of the NFL is on the field for less than half the game. Football is a game of interdependent parts with no one player having the impact of a superstar basketball player. This is also why free agency is more impactful in basketball: NBA players can move seamlessly from team to team while the NFL is schematic and system-oriented, making for more difficult transitions.

The NFL’s Franchise Tag allows teams to effectively remove its top free agent from the free market. The Tag – now with reduced numbers from the previous CBA – not only has served teams well in retaining stars but in giving teams greater leverage in negotiations with star players.

A Franchise Tag type of tool was on the wish list for NBA owners in their CBA negotiations but sacrificed in order to make other gains.