Postscript on the Deal

Before jumping into the signings and onslaught of activity about to happen in the NFL, let’s take one more look on what was the only story in the NFL since early March: the lack of the NFL.

As sports fans, we are always looking for winners and losers of competitive events. It gives us a nice clean order to our world. And with most contests, it is very clear who the winners and the losers are. With the new NFL ten-year CBA -- still being negotiated with finishing items needing resolution -- it is not as clear. I have always scoffed at the tired cliche of "win-win" but have to admit there are those elements here with this new deal. With that, let's take a look at who comes out ahead or behind with this new agreement that will govern the sport of football for an unprecedented ten years. 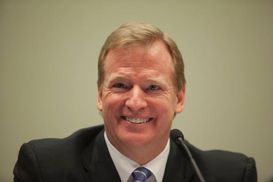 ICONThe business of football will grow and please Goodell.

Goodell was charged with the task of forging a new economic model with the Players and he was able to do that through an increased revenue split. He now presides over the longest labor agreement that we have known in the NFL and the longest running agreement of all the major sports leagues. Goodell stood firm in the path of vitriol thrown his way (see below).

The business of football

The best part of this deal is that there is incentive to grow the business from both sides. Beyond the actual percentages that each side will receive, the percentages come from dollar one. In other words, every bit of revenue generated in the NFL -- from media, sponsors/ventures and from local revenue -- is shared by the Players. Once the "All Revenue" (AR) formula was in place, rather than pegged increases for the Players, there was no need for a shorter deal or opt-out.

Also, with a decade of labor peace assured, television networks and business partners of the NFL and its teams will have no hesitation to spend away. The next round of television negotiations will soar (see Olympics, NBC), business will grow, and Players will receive their appointed share from dollar one.

The rank and file

A couple things to note here: (1) with all the talk about the rookie sacrifice, the vast majority of rookies will actually make more than they did previously due to higher minimums; and (2) approximately half of all NFL players make minimum, meaning half of the NFL just got an automatic $55,000 raise.

The biggest win for the Players, as I have said, is a higher spending floor, not ceiling. Teams have to spend 99% of the Cap in cash collectively, and 89% individually, with levels to rise in the future. The important timing note here is that this is calculated at the end, not the beginning of the year.

This will be a boost to young rising players, as teams will look at their roster in November and December and use remaining cash and Cap to lock up these players with big end-of-year deals. I always operated this way in Green Bay but now more teams will do the same.

Players who suffer career-ending injuries will have far greater injury protection than they have before, while also allowed to buy into the NFL health insurance plan for life, an opportunity they have not previously had. Retired players (called "former" players by the NLFPA) will receive stepped-up funding, although not as much as some retired groups were hoping for. This deal addresses the Players' concerns on the brutality of the sport.

A by-product of this deal is that NFL players will have more time in the offseason at the location of their choice rather than their team facility. This also means that players will spend more time with their “guy” – trainer, strength guy, speed guy, etc. These private trainers are the accidental winners of this deal.

Stay with me here. I know the process was boring, frustrating and exasperating for fans, dealing with wranglings between millionaires and billionaires. However, fans may have -- unwittingly -- learned a bit about what goes on behind the scenes of this $9 billion business. We love the NFL and because of that there are boatloads of money pouring; the fundamental question was: who gets how much? Fans learned, whether they wanted to or not.

Locked-out players needed a target and they found one in Goodell. No specific owner nor any of the cadre of lawyers working for the NFL was visible enough in these negotiations to become a punching bag for Players. Goodell wisely did not engage any of the comments -- some even being personal -- but it may be a while before the Player anger subsides, which it will.

This group was caught in the crossfire of this labor deal, not really labor or management. They had to support their ownership yet also need the loyalty and support of their players. More importantly, they will suffer in the future of this deal. Time in the offseason and intensity of work during the season will be drastically reduced. The new deal ensures that coaches will have far less time with players. Coaches are the sacrificial lambs of this deal, along with:

We've known this for two years, or since JaMarcus Russell busted for the Raiders. Owners were embarrassed by these numbers; veteran players resented these top picks. Here is the most stark example, at the very top: Sam Bradford will make $48 million in the first four years of his deal; Cam Newton will make roughly $22 million. Enough said.

I received many messages from fans and fan groups who were turned off from the game and claimed to not want to follow the game anymore. Really? We’ll see. The season starts in over a month. And Monday’s turn of events were received with complete jubilation.

I keep hearing how teams -- especially with new coaches and/or quarterbacks -- are going to struggle with this condensed offseason. The fact is that every one of these coaches and players have prepared to play football in far shorter time frames than what we have ahead of us here. The level of play will be fine.

On a personal note, thanks to so many of you for your kind words about my coverage of this messy battle. It is messages like t his – from "RM"-- that make all the hard work worthwhile:

Andrew, on behalf of many readers, a big thank you for making this lockout clear, for breaking down the issues, the key players, the stakes, and the progress made at each and every step of the way.The site absolutely set itself apart thanks to your writings. Great job, really. It's funny because I can't remember the last time I felt like thanking a writer for doing his job. Nowadays, information seems owed to us - I guess that only good, smart, researched information feels like a gift. And now, glad to have football back.

The labor situation gave me a platform to use my background on both sides of the table to take you inside the negotiations. It was nice to hear from people on both sides of the NFL-NFLPA negotiations telling me I was covering the issues in a fair and balanced fashion (even though each side thought I was favoring the other at different times!) I am grateful to all of your kind comments. Now on to the business of football, rather than the non-business of football!