Before discussing the issue that has come to the forefront in negotiations of top rookie contracts this year, a note about the retirement of Randy Moss. 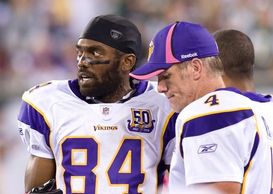 ICONMoss and Favre got their wish, briefly.

Having been a member of the Packers for many years, there were few players that tormented us more than Moss. I also heard his name repeatedly from Brett Favre, who dreamed of the possibility of playing together with him. Brett and Randy knew each other well, and Bus Cook, Brett’s agent, also advised Randy. And the possibility of them uniting arose when the Raiders were dealing Moss during the 2007 Draft.

I detailed the story of trying to bring Randy to the Packers here. And it was certainly no coincidence that Brett retired the day after Moss signed with the Patriots (for the second time in two years in 2008), ending the second chance the Packers had at signing him.

Moss retired because none of the teams he wanted to play for had a mutual interest. He did not want to be the rent-a-player that Terrell Owens has become – at least not for most teams – moving from team to team with one-year deals (although Randy moved through three teams last season).

Will he stay retired? That has more to do with the teams he would like to play for – contending teams such as the Patriots (he claims to have a strong relationship with Bill Belichick and Robert Kraft), Steelers, Colts, etc. – than it does with him. If one of these teams will “unretire” him, my sense is he will unretire.

The Rookie Revenge When the new rookie compensation went into effect this season, we knew two things about the first round of the Draft: (1) first-round picks would make far less than in recent years, especially at the top; and (2) negotiations would be smoother and less complicated – four-year deals with an option, no buybacks, voids, incentives, or escalators beyond predetermined amounts.

There will also be no more second-year option bonuses, one-time incentives, and exploding escalators that traditionally gave top picks a “second rookie pool”. These concessions were a big “win” for the Owners (and their negotiators), who had made the sacrifice of top rookie contracts a priority.

Now, as first-round negotiations continue to play out in this compressed and frenzied time, we are seeing an interesting issue develop in the middle of the first round, creating a logjam. Top picks are getting their “win” in another way.

Now that these loopholes have been closed, agents of top picks are trying to maximize the impact of the money that is available through guaranteeing it.

In a nutshell, a guarantee is simply a contractual promise that the team will continue to pay the player even if he is released for “skill” (he's not good enough), "Cap" (they can't afford to keep him) or “injury” (he's hurt). In simplest terms, the player will get paid regardless of what happens, save for suspension or non football-related injury.

The first contract negotiated in this year’s first round was between the Buccaneers and Adrian Clayborn. To the surprise of many, the entire contract for the 20th pick in the NFL Draft was guaranteed.

Clayborn’s contract has become a polarizing issue in this year’s condensed negotiations. There are a few front offices around the league cursing the Buccaneers under their breath for creating a precedent that will certainly be in place now for probably the ten-year length of the deal.

The line of demarcation

Once the Bucs fully guaranteed Clayborn’s deal, the negotiation focus of the picks around Clayborn became the only issue to negotiate.

The remaining unsigned picks in the first round were drafted right around Clayborn. Although the 16th pick, Ryan Kerrigan of the Redskins, also has a full guarantee, there appear differences in the three picks between Kerrigan and Clayborn (Nate Solder-Patriots, Corey Liuget-Chargers, and Prince Amukamara-Giants) on whether these players’ contracts should be fully guaranteed. With established guarantees above and below them, the teams would appear to be against the market, but are taking a stand that these deals should not be fully guaranteed, and the stalemate continues.

As for the picks below Clayborn, the agent for the 21st pick, Phil Taylor of the Browns, says that Taylor has an "almost fully guaranteed" contract, while the 22nd pick (Anthony Costanzo, Colts), 23rd pick (Danny Watkins, Eagles) and 24th pick (Cameron Jordan, Saints) just gave up their quest for the fourth year and have agreed to have only the first three years guaranteed.

Agents are privately blaming the 27th pick -- Jimmy Smith of the Ravens -- for agreeing to have only three of the four years guaranteed, as he was the first pick to come to an agreement after Clayborn did and had an opportunity to demand the same. Now the precedent seems set for years to come for these lower picks in the round.

We now have a game of chicken between picks 16-19, as the battle over the fourth-year guarantee, which has become the sticking point in otherwise relatively simple negotiations in this new system.