St. Louis in the Rearview

After a weekend to ruminate a bit, here are some lingering thoughts from my field trip to the Eighth Circuit Court of Appeals in steamy St. Louis:

While watching two of the top – if not the top two appellate lawyers in the nation <span style="font-weight: bold;">(Ted Olson for the Players and Paul Clement for the Owners) make their half-hour presentations, I thought the following:

(1) How much are these guys getting paid? I can only imagine. My sense is that for their preparation of the brief and their 30 minutes of actual arguments, they probably earned a six-figure sum. Nice work if you can get it.

(2) I wonder what the hired counsel already in place – Jeff Pash and Bob Batterman on the Owners’ side and Jeffrey Kessler and Jim Quinn on the Players’ side – thought of being told to stand down for the hearing.

(3) These two elite lawyers are hired guns in the truest sense. They were not part of this fight before and will not be part of it again. They swooped in and will now go on with their non-NFL lives.

(4) Clement was the more polished of these legal all-stars though due in part to Olson dealing with more frequent and pointed interruptions from the judges. I am still surprised that Olson didn't hit harder on the Owners' interepretation of the Norris-LaGuardia Act that is different than the 1st, 7th and 9th Circuits.

(5) Clement strayed into the "players are enjoying the lockout" territory, only to be pushed back by Judge Benton with a comment about the Owners "making some loose comments as well." Kudos to Benton for implying "Let's not go there."

(6) Judge Bye – the lone dissenting judge in support of the Players – did not speak until the closing remarks, although his face could tell a thousand words, as his colleagues did not seem inclined to change their minds.

A key issue in Friday's hearing involved if and how long the labor exemption – protecting Owners from antitrust scrutiny – lasts following the NFLPA’s decertification on March 11th. Judge Benton pressed Clement on the time that must elapse before this protection dissolves. Clement's answer: one year. Thus, were the Court were to adopt the Owners' view, the Players would be prohibited from bringing Brady v. NFL until March 11, 2012.

The recently expired CBA (Article LVII, Section 3(A)) expressly notes that upon expiration of the CBA, the Players may not bring antitrust claims for six months – which would mean a date of September 11, 2011.

My sense is that the Court – assuming it views the labor exemption as still intact – would adopt the six month period over the one year duration, especially since this timing was agreed upon by both parties. 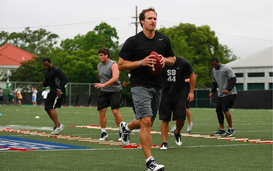 Neither Brees nor Brady nor Manning were at the hearing.

The show of support from over 20 NFL players was impressive. However, the lack of star power from the Big Three was disappointing.

Tom Brady, Drew Brees and Peyton Manning have lent their names to this lawsuit against the NFL yet none of the three chose to make April 6th in Minneapolis or June 3rd in St. Louis priorities on their schedule to support their case.

It was nice to visit with an old friend from the Packers in Cullen Jenkins, whose four-year, $17 million deal I negotiated in 2007. Now that deal is up and Cullen has a true vested interest in the lockout being lifted. As a productive player at a high-impact position, he will be in high demand once NFL football returns.

One of the more interesting characters of this offseason in the NFL has been Michael Gans, the clerk for the Eighth Circuit. The bow-tied and bespectacled Gans – pardon the pun – “held court” on Friday, shaking hands and directing traffic. Gans will soon be back to advising the media on the potential timing of an opinion on the appeal from Friday’s hearing.

As for the “secret talks” of last week – uncovered by our own Brad Biggs due to the recognizable Silver Star on Jerry Jones’ private jet – the Owners accomplished their purpose in removing court-ordered mediation from the Minnesota court’s jurisdiction.

While mediator Arthur Boylan will still have a presence, it will be away from the Minnesota locale, a place the Owners wanted no part of. This is a “win” in itself for the Owners.

Hope for a deal?

The Owners’ message is that the deal the Players make now may be better than the one after the Eighth Circuit ruling. If the two parties truly heed Judge Bye's advice, perhaps an agreement can be made prior to the ruling. However, the Players may be hesitant to agree to a deal prior to the "lockout insurance" damages award ruling from their friend Judge Doty.

My sense is that nothing will happen soon, but a framework for a deal can start taking shape while awaiting the Court ruling. The best news is that while Courtroom football continues, the two sides are once again talking about the issues again.

As I have said since the day it was filed, Brady v. NFL is never going to go to court. It is all about tilting leverage towards a CBA, and the sketch of that CBA that was being formed on March 11th will hopefully take more shape starting this week in private talks.

We can only hope…