The NFL loses a legend

Al Davis's passing evokes many thoughts of a true legend in the game of football. Davis's name has to be mentioned as one of the leading voices in football.

As an agent, I remember starting my career working for David Falk and how much Davis craved client Willie Gault. Davis, as has been well-documented, loved speed and how it created such a difference in the game. Gault was someone Davis desired greatly, and I could tell that it was something Davis was going to make happen. 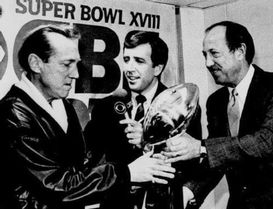 Davis was one of the leading voices in football during his time in the NFL.

I also dealt with Davis as an agent representing a former first-round pick named Ethan Horton from North Carolina. Ethan had little success with the Chiefs, who had selected him in the first round, but Davis saw something and made Ethan a successful tight end for several years with the Raiders. Ethan owed his career to Davis.

When I joined the Packers I worked for Ron Wolf, one of the great general managers of the game who learned his craft working under Davis. Ron used to joke about Al and imitate him but there was obviously great respect and deference. There were several times where I was around Ron and he would say, almost as an aside, "this is what Al would do."

We dealt with Davis in 2007 on the Randy Moss trade. Obviously, the Raiders were not going to keep Moss that year and his $9.75 million salary. While I worked on contract negotiations with Moss's agents, we were also working on trade compensation for Moss with Davis. It was clear that, although he had given up a high first round pick for Moss, he was ready to move on for the bargain price of a mid-round pick, which he ultimately got from the Patriots as we could not come to terms with Moss on a contract (he wanted a one-year deal, which we would not do).

When I left the Packers, I had a couple of discussions with Davis about helping them out as a consultant on their contracts and Cap management. Although the conversations didn't advance much, I will always remember how much he knew about the players on the Packers and, more surprisingly, about me. He felt a bit embarrassed about a recent contracts he did for Javon Walker but he really wanted the player. To him, it was always about the player.

He may have had some issues with coaches and management, but he loved players. Agents loved dealing with him because he just wanted the player. He loved getting the player that he wanted.

Say what you will about Al Davis -- and many have said a lot -- but he will be missed. The NFL will not be the same without him.