Hope floats with meetings between the NFL and the NFLPA continuing in Maryland this week and a meeting of the full NFL membership next week in Chicago. The parties have pressed pause on Courtroom football and refocused on a Collective Bargaining Agreement (CBA). With this optimistic news, let’s reset the Top Ten issues as we hope for common ground.

The NFL presently generates over $9 billion and may top $20 billion by 2016. The biggest issue of this dispute is how to split these revenues.

Players: The Players are playing goalie, trying to maintain the present 50-50 split. They have been rebuffed in their requests to view team balance sheets from the past 10 years.

Owners: Since opting out of the current CBA, Owners have cited the recession, enormous debt and diminished appetite for public stadia financing. Their request for a $1 billion rollback is now under $250 million. They have offered Players roughly 46-48% and a 2011 Salary Cap of $141 million – the Players are requesting $151 million. Salary allocation on that proposed Cap was only $114 million with $27 million to benefits, but Owners were prepared to move to $126 million in salaries and $15 million in Benefits. I explained the Cap issues and formulas here.

The key for the Players, as I have told them, is not to worry so much about the Cap -- the Cap can be massaged and molded, as I know well from my days managing it. The important issue is Cash and a commitment from Owners on a minimum cash commitment from each team at a level approaching 93-95% of the Cap number. That is real money.

Players: The Players – citing injured/reserve numbers – have termed an 18 game season “non-negotiable”. However, when money is involved, everything is negotiable. Eighteen games – beginning in 2013 or later – could move the revenue split closer to 50-50 and provide for concessions such as increased roster size, in-season injured reserve list, reduced offseason contact, etc.

Owners: Owners know the “enhanced season” could generate approximately $500 million in additional revenues and are willing to provide multiple health and safety concessions for an enhanced season.

I explained this issue further here.

Rookies have no voice in this fight and will be sacrificed. Both sides agree on reform here, with different methods of implementation:

Owners propose more of an NBA-type "wage scale" with:
• Mandatory five year contracts for the first rounders; mandatory four year contracts for all others.
• Pre-defined bonus and salaries depending on draft position.
• Incentives/escalators tied to All-Conference performance.
• No renegotiations or extensions for three years (presently two).
• Signing bonuses payable in prorated amounts and subject to annual recovery.
• Minimum salaries below 2010 levels.
• No skill or injury guarantees.

Players at the top of the Draft will be reduced dramatically by this next CBA. Sam Bradford will go down as the last of the bonus babies.

Owners curse their inability to recoup bonus money due to negative rulings in cases involving Michael Vick, Plaxico Burress and others. Players will give on this issue but expect concessions in return. 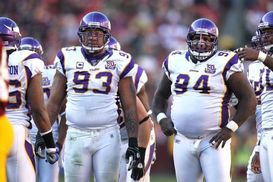 Owners: The Owners will push for HGH testing to insure the integrity of the game. Also, to remedy the Pat and Kevin Williams debacle, Owners want to forbid players from using state courts regarding drug policy violations.

Players: Players support collectively bargained rules but oppose HGH testing as overly intrusive. They request an independent arbitrator to hear drug-testing appeals. Owners will agree to this neutral arbitrator although they will not do so with conduct. Speaking of which…

Owners: Commissioner Goodell’s effort to maintain the integrity in the NFL has been a staple of his tenure and Owners expect the Policy to continue and apply retroactively to lockout conduct.

Players: Players feel Goodell has jumped the shark with overzealous discipline in a Policy not collectively bargained. They want an independent arbitrator for appeals and with no governing CBA, no discipline for lockout conduct.

The Policy’s application during the lockout will be an issue swirled into the final resolution of the CBA. The losing side on this issue will receive concessions elsewhere.

Both sides agree on more safety reforms in a new CBA.

Owners have offered:
• Reduced offseason programs (from 14 to 9 weeks) and OTA workouts (from 14 to 10 days).
• Limits on full-padded practices and increased days off.

No matter the resolution here, the NFL will look a lot different in the offseason than in previous years, with coaches having much more limited contact with their players. They will not like the new CBA in this regard.

While groups of former players collide, both Owners and Players acknowledge the need for improved assistance to former players. The questions are: how much and from what source?

Playe rs have proposed a "Legacy Fund" from benefits not paid by Owners in 2010.

Owners have proposed improvements in the present disability and 88 Plan (for dementia) and post-career education/transition programs. They have also offered increased retirement benefits and lifetime eligibility in the NFL medical plan.

Owners want to shake free from the Minnesota federal courts and the pebble in their shoe, Judge Doty. Players will resist; Players' biggest gains have come through litigation here. There may be compromise, with some issues requiring oversight and others excluded.

Perhaps a bigger issue is the possibility of decertification again. With the language in the present CBA subject to differing interpretations, Owners will attempt to eliminate this in the future. Players will fight strongly to keep this option.

With multiple reports of progress being made, there is certainly cause for optimism. However, until we have a deal, we don't have a deal. As we know from March, these negotiations have become personal, raw and emotional in the past and could do so again. Having said that, though, the realization of pending economic harm and the agreement to avoid more Courtroom football appears to be a winning formula right now.

The time for an agreement is becoming ripe. Solving these ten issues will give us back football in 2011.