First, kudos to the Tampa Bay Buccaneers and Brian Price for consummating a deal for the highest draft choice yet, the third pick in the second round. Price jumped in the pool and garnered an 8% guarantee increase from a strong deal in the slot last year, that of James Laurinaitis of the Rams, with a $3.55 million guarantee. Now we should see some movement throughout the second round, if not the first quite yet.

After looking at one of the rare long-term extensions with double-digit million guarantees yesterday regarding D’Brickashaw Ferguson’s deal with the Jets, today we’ll look at a short-term solution to a festering problem.

Chris Johnson’s low rumbles of discontent have surfaced this offseason over the Titans’ refusal to show him the money have been pacified, albeit until it likely resumes following the season.

Titans say no to length

The Titans, like many teams in the NFL, have found shelter in the built-in impediment/excuse of the 30% rule, a rule put in place to balance what was thought to be a windfall for players in 2010: the lack of a Salary Cap. The rule, as outlined here in a previous article about Johnson, prevents teams from dumping disproportionate amounts of compensation into this uncapped year and beyond, using the last capped year (2009) as a baseline for increases not to exceed 30%. 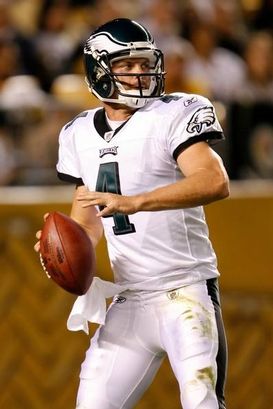 ICONThe Eagles short-term solution for Kolb prevented his deal from expiring this year.

Enter the third scenario: a short-term solution to put a temporary band-aid on the festering discontent. Just as the Eagles didn’t want the player that they are handing their keys to run the team – Kevin Kolb – to play for relatively low wages, the Titans felt the same. Kolb’s situation was both similar -- as the Eagles moved up money he was already scheduled to earn -- and different, as he had the leverage of the last year of his deal to garner a short-term solution worth almost $12 million – with $10 million in bonus money -- over this year and next. Johnson’s deal, unlike Kolb’s, is scheduled to run through the 2012 season, although he would be one unhappy camper if it actually does.

As the 24th pick in the 2008 Draft, Johnson earned a guarantee of $6.59 million. Although nothing to sneeze at, it is certainly not the range of picks in the upper portion of the first round.

The escalator, ostensibly for 2012, increases the deal with the following cumulative amounts and thresholds:

Johnson has earned every threshold for both years he has been in the league, meaning he has already earned half the maximum escalator, or $1.25 million. Assuming equal performance were the contract to play out over the next two years, it is highly likely he would earn the other $1.25 million.

The Titans and Johnson’s camp have not released terms of the increase but most likely have agreed to take that $1.25 million “earned” for 2012 and place it on top of the $550,000 this season. Again, that $1.25 million is not guaranteed money, as the Titans could release Johnson before 2012 and wipe it off their books (in this league, you never know.) Thus, the gesture to bring it up does have some meaning.

My sense is that the Titans added even more than that, to bring his number for 2010 over the $2 million threshold. I do not know that to be the case, but I sense anything below that would have not been received in the way it was meant. And, having been in this situation from a team perspective, if you are going to reward someone with no strings attached, you want to make sure there is significant goodwill in return.

The parties have left the remaining years intact. However, at such time that the 30% rule is not an issue, whenever that may be with collective bargaining in process, this deal will likely be replaced by a long-term extension at the top of the running back market (assuming continued performance by Johnson).

For now, the Titans have dodged a problem with their bell cow player in a way they can look they can justify. It is certainly more than they had to do and certainly less than what Johnson wanted which, for the short term, is probably the way it should be.

The problem for the Titans is that Johnson, although appeased for now, will be continuing to stir the pot towards the big, long-term extension that every player wants.

The problem for Johnson is that he plays the position in the NFL with the shortest shelf life, meaning that he needs to obtain financial security at the earliest possible time he can.

For the moment, at least, problem averted.