Tuesday we posted the offensive All-Rookie team. Today, it's the defense.

The defense had a number of players who made outstanding contributions and should go on to have outstanding careers. Let’s take a look.

Watt was the Texans first-round pick and had an excellent season. He is big, strong, tough and athletic and showed some dominating traits in his play this year. His play is one of the reasons the Texans defense improved as much as it did. Watt finished the year with 56 total tackles and 5.5 sacks. His all-out motor is one of the things that make him so good. He has a bright future.

Dareus started off the season playing as a 5-technique defensive end in Buffalo’s 3-4 scheme. When nose tackle Kyle Williams went down with an injury, Dareus was moved inside to play on the nose. He played more than 75 percent of the defensive snaps and put up some good numbers for an inside guy. He finished with 43 tackles and 5.5 sacks. He is best as a run stuffer, but 5.5 sacks is an excellent number for a rookie inside player. He was a great pickup for the Bills.

I saw the Browns play at least four times this season and every time Sheard did something to stand out. He is not a big guy at 6-4 and 255 but he is strong and explosive with excellent edge pass rushing ability. He finished the year with 55 total tackles and 8.5 sacks and that was while playing in a rotation. 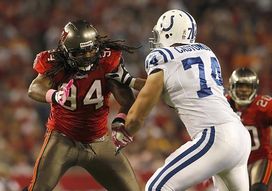 Adrian Clayborn finished his rookie year with 42 tackles and 7.5 sacks.

Tampa Bay had its struggles, but Clayborn played consistently all year. At present he is a better pass rusher than a run stopper but in the NFL there is a premium put on pass rushers. He finished the year with 42 tackles and 7.5 sacks. Going forward he needs to gain some strength and bulk so he can play the run as well as he rushes the passer.

There were some very impressive players at this position and to single out just four was a difficult job.

Miller just may be the most dominant defensive rookie in the league this year. Few have his natural pass rushing skills. Miller missed some time with injuries yet still had 64 tackles and 11.5 sacks. The way he rushes the passer brings back memories of Lawrence Taylor when I was a scout for the Giants.

Smith is listed as an outside linebacker but he is really a pass rushing defensive end. He doesn’t start but plays more than half of each game. He had great numbers for a guy who wasn’t a full-time player and he dominates as a pass rusher. He finished the year with 14 sacks, which was the top number for rookies this year.

Kerrigan was a down defensive end in college and made the conversion to playing on his feet. In saying that he still plays with his hand on the ground in many pass situations. Kerrigan had 63 tackles 7.5 sacks and 1 interception. He will be a tough dominant player in the future.

Ayers played some very steady football for the Titans. He has top instincts and finds the ball. He shows very good hand use to shed blocks and makes a lot of plays. He finished the year with 76 total tackles. He showed very good awareness in pass coverage. I was surprised they didn’t use him more as a pass rusher considering that’s what he was known for while at UCLA. A very good pick by the Titans.

Carter, a 4th round pick, ended up beating out Rahim Moore, a 2nd round pick for the starting free safety position with the Broncos. Carter played well showing good instincts and a nose for the ball. He can be very physical and finished with 45 total tackles and a sack. He has to improve his ball skills as he had no interceptions on the year.

Just as Heard stood out every time I watched Cleveland, the same can be said for Culliver. He’s more of a role player but makes things happen when he is on the field. He finished with 35 tackles and 1 interception.

Smith missed a lot of time early in the season but came on and in the last month has played excellent football. He has excellent size and athleticism for a corner to go along with very good ball skills. He has the talent to become a dominant corner in the league.