Blake Bortles was the first quarterback selected in the 2014 NFL Draft. The Central Florida product was nabbed third overall by Jacksonville. At the time of the draft, Jaguars general manager David Caldwell stated that 2014 would be used as a learning year for Bortles and that he would sit behind starter Chad Henne. He would then become the starter in 2015.

Two and a half games into the season, that philosophy changed. Bortles replaced Henne midway through Jacksonville’s Week 3 showdown with Indianapolis and was named the starter going into game four against San Diego. The Jacksonville brain trust felt that with the Jaguars being 0-3, now was as good a time as any for Bortles to begin his playing career.

Overall, I felt Bortles played like a rookie making his first NFL start. He did some good things, mainly in the first half. In the second half with the Jaguars down, the Chargers created pressure and Bortles struggled. Until he gets fully comfortable with the offense, that is going to be the way it is. The following is a half by half evaluation.

Jacksonville had six possessions and scored touchdowns on two of them. The first possession only lasted two plays as running back Toby Gerhart fumbled the ball away on the second play from scrimmage. Bortles dropped back on first down and overthrew his receiver.

On the next possession, Bortles played well but the drive ended at the San Diego 49-yard line when Jacksonville failed to convert a fourth-and-one. Bortles was six for six on the drive for 49 yards. All his throws were shorter passes with his best being a completion on a third-and-eight situation between two defenders. He showed good timing with excellent zip on the ball. 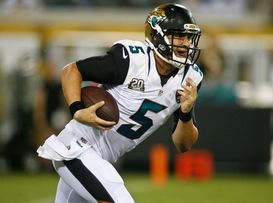 Overall, Bortles showed some promise during his first NFL start.

The next possession ended with Jacksonville scoring a touchdown on a Gerhart one-yard run. On that drive, Bortles hit four out of four passes for 61 yards and a score. The touchdown pass was a two-yard toss to Nic Jacobs in the back of the end zone. It was a good throw in that Bortles threw the ball high leaving Jacobs as the only possible person to catch the ball. The big play on the drive was a 44-yard completion to Allen Hurns who was open by about 10 yards. Bortles was a little off on the throw as far as ball placement is concerned, but Hurns also double caught the ball preventing a touchdown.

On Jacksonville’s next possession, the Jags went three-and-out. Bortles was two for two on the drive for 10 yards but also took a six-yard sack. The final drive for the half was also for only three plays as time expired. The only pass Bortles attempted was a long shot to the deep middle that was overthrown on first down.

For the half, Bortles completed 16 of 19 passes for 151 yards and a touchdown. All told it was an impressive half for him.

The second half didn’t go nearly as well for Bortles. San Diego opened the third quarter with a nine-play, 80-yard touchdown drive to grab a 24-14 lead and putting the Jaguars in a position to play catch-up.

Jacksonville’s first possession of the half lasted only four plays as Bortles threw an interception on a first down situation. It was a clear case of a rookie staring down his receiver and the defender jumping the route.

That play gave San Diego the ball in good field position. The Bolts kicked a field goal to end the drive giving them a 13-point lead.

On the Jaguars next drive early in the fourth quarter, Bortles had some success, but it was as a runner not a passer. He ran twice for a total of 15 yards and completed all three passing attempts on the drive, but for only seven yards. The drive ended at the San Diego 35 when Jacksonville failed to convert a fourth-and-one situation.

Jacksonville only had the ball one more time in the game when it mattered. On that drive, Bortles went 4/7 for 61 yards. The drive ended when Bortles again started down his receiver and San Diego safety Eric Weddle intercepted the ball. Bortles was also sacked twice in the series.

For the second half, Bortles went 12 of 18 for 104 yards and two interceptions. For the game, Bortles was at his best on shorter throws and play action. His ball placement and accuracy on the deeper throws was very inconsistent.

Bortles struggled against pressure in the second half after having plenty of time to throw in the first half. This is typical of a rookie quarterback, so it will be interesting to see what defenses try to do against Jacksonville going forward. Bortles’ two interceptions were when he was getting pressured and then stared down his receiver. Teams may decide to rush Bortles right from the start in hopes that he makes similar mistakes.

Jacksonville plays Pittsburgh this Sunday, a team that is known for its complex defenses and blitz packages. Pittsburgh has injuries to its linebacker unit, so they may choose to play a more conservative game. We will find out Sunday how Bortles responds.