Briggs can't have it both ways with the Bears

Word came out Thursday that Chicago Bears linebacker Lance Briggs asked management for either a new contract or to be traded.

I was working for the Bears when Briggs got his last deal and to say the least it was not a fun time in the office. I don’t think anyone expected Briggs to re-sign with the Bears but he did to the tune of $36 million over 6 years. With the way that the deal was structured he received 22.35 million over the last 3 years between bonuses and salary, a yearly average of 7.45 million per year. In short, Briggs had his opportunity at free agency, made the best of it and was rewarded very handsomely. Now he and his agent want more money. Why? 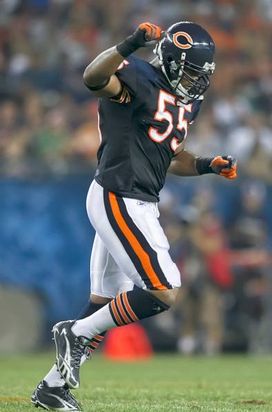 ICONLance Briggs is unhappy with his current contract status.

In their opinion he is now taking a pay cut. After making over 22 million the last 3 years he will make an average of 3.70 million over the next 2 years for a total of 7.40 million. In his mind he is taking just about a 50 percent pay cut. Of course they forget that the last year of the contract, Briggs is scheduled to make 6.25 million which brings up the average of the final three years considerably.

Briggs’ agent is Drew Rosenhaus, who is famous for doing things like this. Rosenhaus always like to stir up the pot so to speak and could care less what kind of problem it causes the team/teams. What bothers me about the situation is that they got the deal they wanted three years ago and are now crying. The deal was structured the way that Briggs and Rosenhaus wanted it…with a lot of upfront money. I’m sorry boys, but you can’t have it both ways. You got the deal you wanted now live up to it and stop crying!

If I’m the Bears I would tell both Briggs and Rosenhaus to take a long walk on a short pier. If they don’t like it, then don’t play! Fine him the maximum for not living up to his contract. They will argue that he has outplayed the contract, but that’s not true.

When the deal was done he was paid to play up to his high level, so in other words his performance is what was expected of him. Every player in professional sports has to be replaced sooner or later. The Bears will find a player to replace Briggs if he doesn’t want to play. Rosenhaus will cry to the press like he always does and so will Briggs.

I say let them…and don’t pay him another penny!