Camping out with Green Bay and Chicago

I spent Monday and Tuesday with fellow NFP writer Matt Bowen visiting the training camps of the Green Bay Packers and Chicago Bears.

Granted, one practice can’t tell you a whole lot, but I was still impressed with some of the rookies on both clubs. 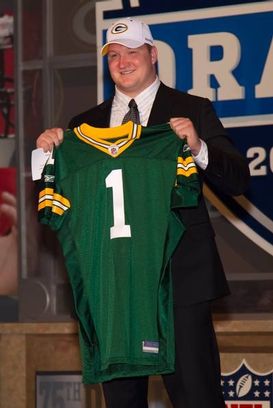 ICONBryan Bulaga did not look out of place when working with first-teamers at Packers camp.

Green Bay’s first-round pick, tackle Bryan Bulaga from Iowa, took reps with both the first and second team. When working with the first team, Bulaga did not look out of place. He is strong and athletic and shows very good balance. In pass rush drills, he showed a strong punch and good mirror skills. Green Bay has been very happy with his work ethic and professional attitude.

In the second round they took defensive tackle Mike Neal from Purdue. Neal is a big strong kid. He may be in the best physical shape of any Green Bay defensive lineman. Technique wise he is still a bit raw, he has to learn how to use his hands better, but because of his strength and athleticism he will get play time as a rookie.