Do preseason college polls have value?

We are getting very close to the release of the preseason college football polls. Every summer, ESPN/USA Today and the AP give us their preseason top 25 college football teams. The fans and alumni of these 25 anointed teams are given a reason to gloat and jump for joy.

The problem is that the polls may be worthless.

No one can tell us who the top 25 teams are at this date because we don’t have enough information. It’s nothing more than a guess. I guarantee that when you look at the final top 25, it won’t be close to the preseason polls.

Why? There are a number of reasons, but for now let’s look at a few. 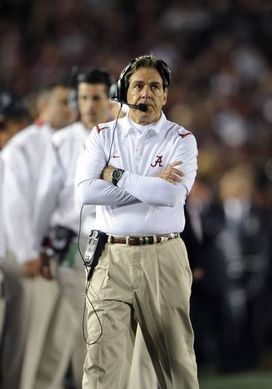 ICONNick Saban's Alabama squad is still loaded with talent, but some key personnel will be missing from the 2009 team.

Most of the polls are based on what a team did last year. This year’s team is not last year’s version. Every season, a team creates its own identity. Sure, there may be a number of starters back on the team, but are they key starters? What key players were lost to injury, graduation or early entry into the NFL? Who are the leaders and how strong is their leadership? Do these leaders play key positions? What is the character of this year’s team? Can the new starters perform at a winning level? How good are the redshirts and incoming freshman and can they contribute? Is the QB experienced or inexperienced? These are some of the major internal factors that will play out throughout the season.

There are also external factors that affect a team’s status, such as the schedule. It’s not necessarily who you play but when you play them during the season. If you are playing a team that has had a coaching change then it’s usually better to play them early. It takes a college team awhile to adapt to new schemes. Also, some teams start off strong and then fade away. Others will be the opposite — they start slow and then get better as the season goes on. Injuries to key players also will have a dramatic effect on any team. There are numerous variables.

The other thing that preseason polls create is expectations. There have been many coaches who have been fired because their team didn’t meet expectations. Especially if that team was ranked in the preseason top 25 and didn’t finish as a ranked team.

Reality is that a team might be average and the coach knows it, but the media has it ranked. When that team starts slowly, the alumni and administration get angry and the coach gets put on the “hot seat.” There have been times in similar situations where a coach does an outstanding job just to get a winning record but he loses his job because the team didn’t meet preseason expectations.

Of course the opposite is also true. The media could think that a team is going to be average and then they have success, but the team doesn’t get the accolades they deserved. By not being ranked in the preseason, teams often don’t end up being ranked where they should be at the end of the season. The team might be ranked between 20 and 25 but really deserve to be in the top 10. That could have a dramatic effect on what bowl game the school gets invited to. As we all know, the more prestigious the bowl the more money the school gets. Money has a way of being important.

How do we prevent some of these things? Don’t have preseason polls. The earliest we should see a poll is October 1. Then, we will have an idea of how the college football season might play out and how the teams really are — good or bad.