There is not a lot happening at Notre Dame this week. Going into last weekend the thought was that the Irish would play Maryland in the Champs Sports Bowl. But when the Pac-10 did not have enough teams to qualify for bowl games, a spot in the Sun Bowl opened up. So now Notre Dame renews an old rivalry with Miami in the annual Sun Bowl game in El Paso on December 31. The Sun Bowl almost always has good matchups and this should prove to be a good game for the viewing public. The Irish begin preparations for the game today with a practice this afternoon followed by another tomorrow.

In recruiting, the Irish picked up a surprise commitment in defensive back Ben Okotcha from Coppell, Texas. Okotcha is from the same high school as last week’s commitment, running back Cam McDaniel. Okotcha was a commit to Wisconsin but when Brian Kelly came to visit McDaniel he also offered a scholarship to Okotcha. Since McDaniel and Okotcha are best friends his decision to switch his commitment was easy. This is the 5th defensive back that Notre Dame has gotten a commitment from. It is a position of need and an area where the Irish wanted increased speed and athleticism. 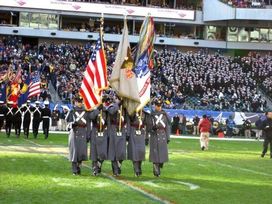 The Army-Navy game is always quite the spectacle.

Except for the annual Army-Navy game, there are no Division I games this weekend. In all my years of scouting the one big rivalry game that I never attended was the Army-Navy game. There are not many if any prospects in this game because of the players’ service commitment after they graduate. But from what I understand the game is always a great spectacle. The entire student body of both schools attend and when they march into the stadium it can be breathtaking. Because I am a big fan of college football, I hope I can see this game at least once.

The FCS (I-AA) playoffs are in their second round this weekend. The interesting game in my mind is Villanova at Appalachian State. Villanova has a highly rated prospect in tackle Ben Ijalana. There are some scouts who feel Ijalana could be drafted as high as the end of the first round. He has already been invited to the Senior Bowl and how he performs in the practices in Mobile will go a long way in determining his final value.

In the NFL, the headline game is the Patriots at the Bears. Both teams are on big winning streaks. The Bears have won five games in a row with a defense that is playing as well as any defense in the league. The Pats are on a four-game win streak and are now clicking on all cylinders. Earlier in the season many felt the Patriots defense was weak. They had a huge turnover in personnel from last season with four rookies playing a big role. Thirteen games into the season these kids aren’t rookies anymore and the Pats defense is playing as well as any team in the league. Two of the rookies who have come up big are corner Devin McCourty and linebacker Brandon Spikes. In the last few weeks both have come up with big plays. McCourty is currently tied for second in the league with 6 interceptions.

The key to the game will be how the Bears block the Patriots blitzing defense. The young Bears offensive line has had trouble with blitz pickup most of the season. Patriots head coach Bill Belichick will find ways to pressure Jay Cutler and try to force him into making bad throws.

The other two big NFC games are Philadelphia at Dallas and Seattle at San Francisco. Seattle is currently tied for first in the NFC West with St. Louis but St. Louis holds the advantage in head to head play with its win over Seattle earlier this season. Seattle has a far better conference record at this time but to keep that advantage they need to win at San Francisco. The NFC West race will probably go down to the last game when St. Louis travels to Seattle.

Philadelphia is tied with the Giants for the NFC East lead and holds the tiebreaker advantage with their win over New York three weeks ago, but with three division games in their final four games they have to just about win them all. Dallas has played much better since Jason Garrett has taken over as coach. This will be a very interesting game.