Last week, we answered questions about the College Advisory Committee. Today, we will do the same in regards to invitations to the annual Scouting Combine in Indianapolis.

How many players are invited to the Combine?

The usual number is 330 players, give or take a few. Invitations to the first 250 go out in mid December. After the underclassmen declare for the draft in January, the other 80 invitations go out.

How many players at each position get invited?

In most years, the list looks similar to this: 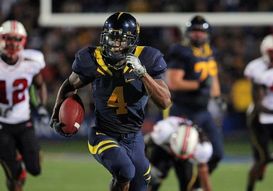 ICONJahvid Best was a first-round pick by the Lions out of Cal in 2010.

How does a player get invited?

Each year there is a committee that votes on who will be invited. The committee is made up of scouting directors or general managers of the different clubs. The size of the committee can change from year to year, but it is safe to say that there are around 7-8 clubs involved every year. The members of the committee vote on each player invited. The head of the committee is Jeff Foster, who runs both National Scouting and the Indianapolis Combine. The one thing I can say about Jeff is he is very good at what he does. There is a huge amount of time and work that goes into preparing for the Combine each year and Jeff does a remarkable job.

How many underclassmen get invited to the Combine?

That number will change from year to year depending on how many underclassmen actually enter the draft. Using averages over the last few years, there are around 35–40 underclassmen invited. Any underclassman that is worthy will be invited. These players are also voted upon by the committee.

After the underclassmen are invited, how are the other players invited?

The players that just missed out on getting the original invitations are the ones that fill out the Combine roster. The committee has a “short list” of players that were maybe one vote short of getting in — these are the players that receive the remaining invitations. Also, kickers and specialists are included in the final grouping.

Is there any lobbying for players to get invited?

Yes, but in most cases it does no good. In the past there have been a few players that I felt should be invited and I would call Jeff and let him know my feelings. I also know that if they don’t get enough votes then they don’t get in.

Also, agents will call teams and ask if that team will lobby the Combine for one of their players that they feel is worthy. Unfortunately there are always going to be players who are deserving that don’t get invited.

From my standpoint, I usually like it when a player that my scout’s graded highly is not invited. This means that they see something in the player that others don’t. I would prefer that the player doesn’t go on the big stage and show off what he can do to 32 teams. In the 9 years I was the College Scouting Director with Chicago we drafted at least one player each year that was not at the Combine and many of those players made our club and were contributors. This past draft our last pick was J’Marcus Webb, a big tackle from West Texas A&M. He was not at the Combine and is now the Bears’ starting right tackle.

Does every player invited to the Combine get drafted?

No. There are about 330 players invited to the combine each year and there are only around 250 draft slots (depending on the number of compensatory picks). So right off the bat at least 80 players won’t get drafted. Also there is an average of about 35 players that get drafted each year that weren’t at the Combine. So in the end only around 215–220 players that are invited actually get drafted. In all my years in scouting, I have seen players drafted as high as the 2nd round be players that were not invited to the Combine.