Is the AFC North really that good?

During the final days of 2014 training camp, we all would have been hard pressed to say that the AFC North was the toughest division in the NFL. However, after ten weeks of play this season, the only division where all four teams boast a winning record is the AFC North.

After last Sunday’s games, the Cleveland Browns sit on top of the division with a 6-3 record, but are followed closely by Cincinnati at 5-3-1 and then Pittsburgh and Baltimore at 6-4. While some of these teams have been inconsistent to say the least, they are still strong clubs and all have a chance to post a winning record when the season is over.

Obviously the Browns are the surprise team if the league, as no one thought Cleveland would have a winning record much less be a first place team at this point in the season. Why has this happened? I’ll start off by saying good coaching. Mike Pettine and his staff have done an outstanding job building confidence in this team and preparing them for each game. 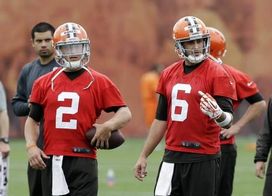 Remember when the QB battle between Johnny Manziel and Brian Hoyer was a thing?

Another reason for the Browns’ success has been the play of quarterback Brian Hoyer. Right now, Hoyer is living the dream. He grew up in Cleveland and is playing for the team he cheered for as a child.

What Hoyer is doing is playing within himself. He is not asked to do nor does he try to do things that he can’t. He is a smart player who can manage the game and does not turn the ball over. In other words, he is playing within himself and that is a testament to offensive coordinator Kyle Shanahan’s coaching. Shanahan also knows what Hoyer can and can’t do and sets up a game plan that plays to Hoyer’s strengths.

Add to that an excellent defense and you have the formula for winning football. Going forward, the Browns’ schedule bodes well for continued success. Their next three games feature a home date with Houston and then road games at Atlanta and Buffalo. Win two of three and Cleveland will be 8-4 going into the final month of the season.

The final four games are tough, as the Browns have to play the Colts and Bengals at home followed by road games at Carolina and Baltimore. That final game could end up being for the division championship. Back in August, few thought that was possible.

Entering the season, I had the Bengals as my favorite to represent the AFC in the Super Bowl. Cincinnati started out great by winning their first three games. Since then however, the Bengals have sustained losses to Indianapolis, New England and Cleveland. Their wins have been against Baltimore and Jacksonville and they tied Carolina.

Part of the problem has been the inconsistent play of quarterback Andy Dalton and another has been the injury to All-Pro wide receiver A.J. Green. Since October 5, Green has only three receptions for 44 yards with one touchdown. Without Green, the offense is not as functional.

Going forward, the schedule doesn’t do the Bengals any favors. Five out of the last seven games are on the road including the next three. Cincinnati is at New Orleans, Houston and Tampa Bay before coming home for a game with division rival Pittsburgh. This road trip could put the Bengals in a hole they can’t escape. While I can see the Bengals finishing with a winning record, getting to the playoffs is another question.

The Steelers are a hard team to figure out. They split their first four games before winning three out of their next four. Ben Roethlisberger put together a streak never seen before in the NFL. In two games, the Pittsburgh signal-caller threw 12 touchdown passes.

Big Ben was on fire until he and the Steelers ran into the Jets.

Going into New York last Sunday to play the Jets, the Steelers were on a three-game win streak while the Jets had lost eight in a row. On paper it looked like an easy win. Too bad games aren’t played on paper, as the Steelers played perhaps their worst game of the year in losing 20-13.

Pittsburgh plays at Tennessee this week before going on the bye. After that, the final five games are tough, but three are at home (New Orleans, Kansas City and Cincinnati). The road games are at Cincinnati at Atlanta. Winning four of their final six is a strong possibility, which would put the Steelers at 10-6. In most years, a 10-6 record can get you into the playoffs.

Like the Steelers, the Ravens are a hard team to get a handle on. Being that they are 6-4, that is a good place to be and they only have one more division game left (Cleveland in Week 17). The problem is that Baltimore is 2-3 in the division, which means they aren’t sitting well when it comes to tiebreakers.

The Baltimore schedule is favorable, with roads games at New Orleans, Miami and Houston and home games with San Diego, Jacksonville and Cleveland. As I said above, the final game of the season against Cleveland could wind up being for the division title.

With their schedule the way it is, I can’t see the Ravens finishing worse than 10-6. The problem is that Cleveland and Pittsburgh could also finish 10-6. If that happens, the Ravens’ division record would work against them.

It will be interesting to see how it all unfolds and it makes the final seven weeks of the season very meaningful. It’s not impossible that all four AFC North teams finish with a winning record but only two get into the playoffs. I can’t see the North having three playoff teams like the AFC West had last year. There are too many good teams in other divisions.