Mid-round picks who could have an early impact

Most coaches and fans expect first and second-round players to get playing time and have some sort of an impact on their club during their rookie season.

When a mid-round player comes on and shows that he can produce as a rookie it’s a bonus. It may be four or five games into the season before they are ready to play but when they do get a chance they show they can be solid starters in the league.

With that said, here are some mid-round draftees who could end up having strong seasons this year.

I did a lot of tape work on Warford this past year. He is a big, strong athlete with excellent balance and can use his hands. In the 2012 season he played Jets first-round pick Sheldon Richardson as well as anyone. Warford is 6-3 and 330 but still light on his feet. He’s a powerful run blocker and has the feet and agility to mirror quick inside pass rushers. I expect Warford to be a starter before he gets out of training camp.

Jones was one of the most versatile linemen in the Draft. He was a 4-year starter at Alabama and started at left tackle, right guard and center while there. He was the glue of the ‘Bama offensive line, which was easily the best in college football last season. He is a very smart player with a strong passion for the game. I look for him to be a future Pro Bowl type player. 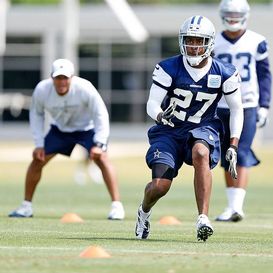 Wilcox was one of my favorite players in the draft this year. He was a running back at Georgia Southern until this past season when the coaching staff moved him to safety. When you watched tape of this player it was unbelievable how good he played at a position he had never played before. He is a very instinctive player and a big hitter. His stock was on the rise after a big week at the Senior Bowl followed by a strong Combine performance. Wilcox may not be a starter in week 1, but I feel confident he will be the Cowboys strong safety before the season is eight weeks old.

When Allen entered the Draft as an underclassman last January many thought he would be a first-round pick. He didn’t work out at the Combine because of an ankle injury and then ran poorly at his pro day. That is why he slid into the 3rd round. Still, when you watch tape you see a player with 4.5 play speed who runs good routes, has sure hands and is a valuable return guy. Allen has too much talent not to be a starter early in his rookie year.

I love it that Jacksonville is listing Robinson as an “athlete” because that’s what he is. He may not start this year but he will make an impact as a role player. Robinson is one of the best athletes in the rookie class. He has great speed and instincts. In my opinion he is a touchdown waiting to happen when the ball is in his hands.

Jenkins was a 3-year starter at Florida at both inside and outside linebacker. He missed time in 2012 because of injuries and that may have hurt his draft stock. Florida had two outstanding linebackers in this draft, Jenkins and Jon Bostic, who the Bears drafted in the second round. Personally, I liked Jenkins better. Jenkins showed me better ability to take on blocks and stack at the point of attack. He is very instinctive and is quick to find the ball. With his speed and athleticism he is very good in both zone and man coverage. The Dolphins got themselves a player with this pick.

A year ago many thought Barkley would be the first pick in this draft. He had a subpar senior season and also injured his shoulder and missed the final two games of his career. While quarterbacks have been overdrafted the last few years, I felt they were underdrafted this year. There is no way Barkley should have lasted until the 4th round. The Eagles traded up to get Barkley and Chip Kelly knows Barkley very well, having played against him for four years in the Pac-12. Michael Vick’s best days as a player are behind him. He is not an instinctive player and turns the ball over way too much in the red zone. Barkley has the tools to be a top NFL quarterback and my feeling is that he will be the starter in Philly before the season is six games old.