One of the nice things about scouting is you get to visit numerous college campuses and attend games at many of these places. In my 29-year scouting career, I have visited every Division I school in the country and been to games at probably 75 percent of those places. Because of traffic and parking a scout has to arrive at a game sometimes 3 to 4 hours before kickoff, so needless to say there is a lot of time to walk around campus and just enjoy the game day atmosphere. With that being said I have decided to list what I feel are the top campuses to visit for a college football game. My criteria is not scientific, just how I enjoyed the game day experience.

While most of the Big Ten schools have a great game day experience, until recently (the last 8 years or so) they didn’t allow scouts in the press box to view games. Because of this we had to buy a ticket and sit in the stands. In many places the ticket wasn’t that good and let me tell you, trying to scout a game from the stands is very difficult. It’s hard to concentrate and fans are always asking you questions. I could write a post just on that experience. Still, two Big Ten schools made my list: Iowa and Wisconsin. My list is in no particular order, just places I enjoyed going to watch games.

I grouped these five together because they all have similar experiences. In the south, people take their football seriously and in some cases the tailgating and partying begins a few days before game day. The campuses are all picturesque and you can’t beat the tradition. The one thing I noticed at Alabama, Georgia and Ole Miss (as well as most of the other SEC schools) is that much of the student body is dressed up on game day. Many of the male students wear sport coats, shirts and ties and most of the women wear nice dresses. At Florida and Alabama, where their stadiums are huge, the tailgating is easily within a 2-mile radius of the stadium, and the atmosphere at these tailgate parties is second to none. 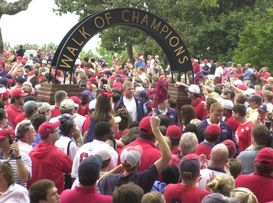 The Grove at Ole Miss is a must-see for college football fans.

Each school has its own traditions but at Ole Miss you have to stop by “The Grove,” which has the party to end all parties. Florida doesn’t have the formal atmosphere that the other schools have (probably because of the heat), but the partying is just as serious.

All of these schools put scouts in the press box where the seats are excellent and the food is great. Parking can be tough at Alabama and Florida but because you have to do a lot of walking to get to the stadium, you also get to see and enjoy the atmosphere. If I had to only cover the SEC it would be easy work because it’s so much fun on game day.

I have been to at least one home game at Notre Dame every year since 1984 and it’s one of my favorite places to go for a game. If you are lucky enough to see a game in mid-October, the fall colors on campus are outstanding. Like the SEC schools, there is tradition galore, especially the team walk from the Gug Center to the Stadium. Each side of the walkway is filled with fans cheering on their team. Inside the stadium it’s no frills…just old-fashioned football. There is no Jumbotron (maybe next year) and the bleacher seats have no seat backs but the overall atmosphere is outstanding. The press box is huge and the chili they serve is as good as you will find anywhere. The late George Young used to tell me he’d go to a Notre Dame game because the hot dogs were so good. I can’t agree with him on that, but everything else is first class!

I’ve been to Iowa for games probably 8-10 times and never since the Big Ten changed their rules about allowing scouts in the press box. So I always sat in the stands. Iowa City is a great college town. I used to stay at the Holiday Inn Crowne Plaza, which is now a Sheraton Hotel. The hotel is right on the edge of a walking mall in downtown Iowa City where you could walk out of the hotel and be just a few minutes from many shops, restaurants and bars. It was a great place to be the night before a game. If I was a high school recruit, it wouldn’t be hard to sell me on going to Iowa…it’s just a fabulous place to go to school!

On game day it was only a 10-minute drive to the stadium where the tailgating and atmosphere is pure midwest hospitality. Great people, great food and always a good football game. Of course the most fun I had at Iowa games was in the late 90’s when I was scouting Matt Bowen. He was one of the best hitting safeties at that time. He ended up having a good pro career with St Louis, Green Bay, Washington and Buffalo and has since become a talented writer.

On football game days, Madison, Wisconsin is the cholesterol capital of the world. Trust me, you will never see more brats and cheese than you will at the many Wisconsin tailgate parties.

The Wisconsin alumni and student body love to have a good time. The stadium is surrounded by bars and if game time is at 3:00 p.m., the bars are packed by 9:00 a.m. My stepson is a Wisconsin grad, so I have been there with my wife plenty of times. From the packed house parties with kegs and eggs on Breese Street to the beer bongs that litter the balconies, the Wisconsin student body knows how to party (maybe too much!). At the end of the 3rd quarter there is a tradition in the student section of the stadium called “Jump Around” that literally shakes the stadium. As good as the parties are, the Wisconsin team is always just as good. It’s a fun place to watch a game.

Going to a game at Clemson is much like going to a game at some of the SEC schools and trust me, the Clemson fans demand a winner. I’ll say this, if you don’t like the color orange, don’t go to a Clemson game because everywhere you go is orange. Like the SEC schools the tailgating is first class. Many people set up these elaborate tables complete with the finest silver and china. Of course the food is pretty good also. If you’re at Clemson on game day you have to stop by the “Esso Club” which is an old Esso gas station less than a mile from the stadium…the barbeque there is to die for!

The view from the press box is superb and the food they serve is as good as any press box in the country. One of the great traditions in all of college football is when the Clemson players enter the stadium. They enter from the east end of the stadium and walk down the hill with each player rubbing “Howard’s Rock” for good luck. Howard is former longtime coach Frank Howard, who had the rock in his office at one time. The tradition of rubbing Howard’s Rock has been in place since 1967 and it fires up the fans for the game.

Oregon might have one of the prettiest campuses on the West Coast. Like Iowa City, Eugene, Oregon is a great college town. The stadium is first class and because Nike founder Phil Knight is an Oregon graduate, the athletic facilities are as good as any in the country. Of course I’m not really a fan of the Oregon multi-color uniforms, but the game day atmosphere is first class. The stadium is extremely loud and can be a difficult place to play for the visitors.