Notes from a scout: My favorite college campuses

I spent close to 30 years in the National Football League scouting for different clubs. During that time I had the opportunity to visit the campuses of just about every school that plays Division I football at least once. Put it this way, the only FBS schools I haven’t been to are Old Dominion, Georgia State and Texas-San Antonio. To say that being able to visit all these campuses was one of the perks of the job is an understatement.

While I haven’t been to games at all of these different schools, I have attended matchups at just about every school in the so-called Power-5 conferences. The only schools that I haven’t seen play in their home venues are UCLA and Oregon State. While I have been to a game at the Rose Bowl (Super Bowl XXI), I haven’t been to any UCLA games there.

With that said, there are certain venues that I would consider my favorite places to attend a game. Most of these stadiums reside in the South, but there are some in other areas as well. When I think about my favorite places to attend a game, the stadium isn’t always the top consideration. It is also the game day atmosphere and the partying that goes on for hours before kickoff. Even parking plays into the equation. Some schools provided scouts with parking passes and that always made things a lot easier on game day.

My favorite venues in no particular order:

Unlike some schools, the stadium at Clemson sits in a corner of the campus where most of the athletic facilities are located. Because of that, there is plenty of open space for parking. Clemson does provide scouts with parking passes, so there is no more than a five or six-minute walk to the stadium. 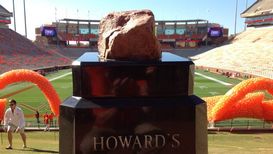 Still, I liked to get there early just to walk around. Like every college, there are tailgate parties galore, but the pure beauty of the Clemson campus in the fall makes the walk very enjoyable. If you enjoy barbeque, the Esso Club is down the street from the stadium. You can get some of the best smoked ribs and brisket in the state of South Carolina at the Esso Club.

The press box at Clemson is big with plenty of room for both the media and the scouts. Clemson always served great food and it’s easy to get from the press box down to the playing field to watch pregame warmups.

One of the great traditions in all of college football takes place at Clemson. When the players leave the locker room to come to the field, they board a bus and go to the opposite side of the stadium to enter. The reason being is that this is where “The Hill” is located. At the top of “The Hill” sits “Howard’s Rock,” named after famed Clemson coach Frank Howard.

When the players enter the field, they all run down “The Hill” with each player touching “Howard’s Rock.” It is one of the most thrilling player entrances in all of college football.

During Labor Day weekend of 1990, I attended three games in three days in the state of South Carolina. On Thursday, the Buffalo Bills played the Chicago Bears at the University of South Carolina’s Williams-Brice Stadium. It was the final game of the NFL preseason for the two clubs and a game in which I was required to do some pro scouting for the Giants. That was the first time I attended a game at USC. Two days later I was back again at what was the beginning of a now 24-year-old tradition.

On Saturday morning of that weekend, I saw Clemson beat up on Long Beach State. The significance of that matchup was that it was George Allen’s first game as head coach of Long Beach State. I left Clemson at the end of the third quarter to travel back to Columbia to see South Carolina play Duke. 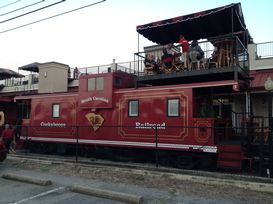 I had a parking pass for a lot on the south side of the stadium. After I parked the car and got to the stadium I witnessed all the fun fans were having at what was the first of one of the great game day parties.

On the railroad tracks that sit adjacent to the south side of Williams-Brice Stadium reside 22 caboose cars. I don’t remember if they were all painted red back then, but now they are all the color of South Carolina’s uniforms and highly decorated. The cabooses are called the “Cockaboose Railroad” and are owned by rabid South Carolina fans and boosters. Some serious partying takes place on and around each of these caboose cars both before and after every game. It’s an extremely enjoyable sight to witness.

Like Clemson, the press box in the stadium has plenty of space and it’s very enjoyable to watch games there.

The odd part of that weekend was at each game the food served was barbeque. I can’t remember ever having so much barbeque over a three-day period. Damn, it was good! So good, in fact, that I bought a smoker when I got home.

Notre Dame has one of the best game day atmospheres that I have ever encountered. The campus is absolutely beautiful, especially in mid to late October. There is a lot of history and tradition on the campus and to get there early and walk around is interesting, to say the least. There is the “Grotto” which is inspiring just by its pure beauty.

The Notre Dame marching band plays on the steps of Bond Hall for the thousands of fans waiting for the stadium to open. The tailgating that goes on in the parking lots all over campus are second to none.

The best part of the pregame activities is when the Notre Dame football team walks in unison from the “The Gug” (the football complex) to the stadium. The walk can’t be much more than a quarter of a mile, but the roadway is lined by thousands of fans cheering on the team. If that doesn’t get you pumped up to play a game, nothing will.

The stadium itself is nothing special, but has as much tradition as any stadium in the country. And then there is “Touchdown Jesus,” the huge mural on the outside of the Hesburgh Library. Its official name is “The Word Of Life,” but since it can be seen overlooking one of the stadium’s end zones, it got its more recognized nickname.

At virtually every SEC school, the game day atmosphere is outstanding. I loved going to games at Alabama, but the stadium has now gotten so big that it’s almost impossible to get in and out of the area. The stadium may hold 100,000 fans, but I guarantee there are 200,000 partying.

Ole Miss is a great place to attend a football game. Like most SEC schools, there is an abundance of tradition at Mississippi. Ole Miss though has what the others don’t and by that I’m referring to the legendary “Grove.” The Grove is an area that I would say is 8 to 10 acres big. It is a beautiful setting that is lined with oaks, elms and magnolia trees.

On game day, thousands of Ole Miss fans gather in The Grove to tailgate and party. These aren’t your basic tailgate parties, as the Mississippi fans go all out. People are often dressed to the nines and you will see fine china and candelabras on the tables. I would bet that people spend days preparing for these parties. Needless to say, it’s a fun place to spend an hour before going into the stadium to “work.”

At most SEC schools, I have seen one thing that I seldom see at other schools. In the student sections, most of the kids are dressed up. Guys wear dress shirts and ties while the girls often have on very nice dress es. I don’t know if this is an SEC tradition, but it’s just something that is very noticeable.