On Carr, Mallett and Watt

There is never a lack of news when it comes to the National Football League and Labor Day Weekend. However, what is surprising is some of the news that surfaced over these past few days.

Derek Carr gets the start in Oakland

Being that I had Carr as my top quarterback in the 2014 draft, I am happy that with the opening of the 2014 season, he is the only rookie quarterback that is an opening day starter.

Granted, all quarterback competitions are different and the clubs that drafted signal-callers high all have a plan in which to develop their young players. The fact that Carr is the only opening day starter does not mean he is the best quarterback in this year’s rookie class. It only means that he is first of the group to get an opportunity. Jacksonville’s Blake Bortles played some good football during the preseason and I’m sure that he will be the starter in the not too distant future. 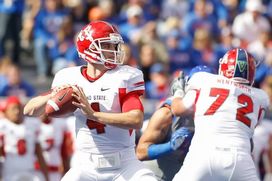 From starting at Fresno State to Oakland in less than a year, Derek Carr was the choice for the Raiders.

What is surprising about Carr winning the quarterback competition in Oakland was that he wasn’t supposed to. The plan was for veteran Matt Schaub to be the starter at least through 2014. Going into training camp, Schaub got all the first-team reps while Carr was splitting reps with Matt McGloin on the second unit.

Once the preseason started, Schaub struggled like he did over the last few years in Houston. Carr played adequately in Oakland’s first two preseason games, but suffered a concussion in that second game against Detroit. He had to miss the important third preseason game against Green Bay, so the thinking was that Schaub would at least begin the season as the starter.

When Carr got the opportunity to start the final preseason game against Seattle, he took control and put up some outstanding numbers. While only playing the first half, Carr completed 11 of 13 passes for 143 yards and three touchdowns. The performance was too strong to keep the rookie on the bench any longer. McGloin played much better than Schaub all preseason and it will be interesting to see if he is the primary backup opening day.

With the regular season starting, the vanilla defenses Carr faced during the preseason will now be much more complex and how he reacts will determine just how long he holds on to the job.

Houston acquires Ryan Mallett in trade with the Patriots

Going all the way back to May’s draft, many in the media felt this trade was going to happen due to the fact that Houston head coach Bill O’Brien coached Mallett in New England during his 2011 rookie season.

What the media didn’t realize was that that O’Brien’s time with Mallett not only showed O’Brien what Mallett could do, but what he couldn’t. Mallet’s flaws happen to outnumber his strengths.

On the plus side, Mallett has size, a strong arm and a fairly quick release. On the negative side, the Arkansas product lacks speed and quick feet, cannot extend or make plays with his feet and is not the quickest decision maker.

New England head coach Bill Belichick is not in a habit of getting rid of top players, especially at the quarterback position. If Belichick thought Mallet could play, he would not have drafted Jimmy Garoppolo in the second round of this year’s draft.

In Mallett’s three years in New England, other than during the preseason, the quarterback threw a total of four passes, completing just one. It’s not like Belichick was showing a lot of confidence in him.

When you look at the fact that Houston surrendered only a conditional seventh round draft pick in exchange for Mallett it shows that O’Brien wasn’t exactly positive that Mallett was going to be any better than what he already had. A conditional seventh round choice is nothing, slightly more than a waiver claim. If he really wanted Mallett, O’Brien would have made the trade much earlier and paid a lot more. If I were a Houston fan, I wouldn’t get too excited about Mallett being the quarterback of the future. The price for the trade shows his stay in Houston could be short lived. If Mallett doesn’t show something quickly he could be released and the Texans would then recover their seventh round draft choice for next year.

While the Mallett deal might have created a ripple in the Houston news cycle, Watt’s contract extension created a tidal wave. In three season’s Watt has quickly become one of the top inside defensive linemen in the NFL and is the face of the Houston franchise. 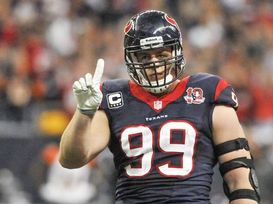 Both on and off the field, J.J. Watt is worth every penny.

What’s even more important is the fact that not only is Watt an elite football player, but he is a terrific person. He has been a great ambassador for the NFL and Houston in his short time in the league. He plays the game hard and is an asset to the club off the field. The league needs more players like J.J. Watt.

With two years left on his rookie contract, Houston was not obligated to do an extension at this time. By rewarding Watt now, it shows us how important he is to the franchise both as a player and a leader.

When I started working for the New York Giants in January of 1985, the Giants were Lawrence Taylor’s team. I think the same thing can be said about Watt in Houston. He will be the player who leads the Texans going forward and will also be the player who demands the most from top draft choice Jadeveon Clowney. Things are looking up in Houston.