The big game nobody cares about

When the NFL schedule was released last spring, one matchup that looked as if it would be a game of significance featured the Tampa Bay Buccaneers traveling to Chicago to face the Bears in Week 12. The game was going to be a homecoming of sorts with former Bears coach Lovie Smith facing his old team at Soldier Field. Under new head coach Marc Trestman, the Bears had one of the best offenses in the NFL in 2013 and with this being the second season in that system, things were supposed to be even better in 2014.

Both teams worked free agency hard and it looked on paper as if they signed the right people to strengthen weak areas on their respective rosters. Tampa Bay signed defensive end Michael Johnson away from the Bengals, defensive tackle Clinton McDonald from the Seahawks and defensive backs Alterraun Verner and Mike Jenkins from the Titans and Raiders, respectively.

On offense, the Bucs signed left tackle Anthony Collins, who was with the Bengals, quarterback Josh McCown from the Bears and, during training camp, traded for former Pro Bowl guard Logan Mankins from the Patriots.

While the Bears offense was one of the better scoring units in the NFL last year, the team’s defense was horrible. One problem was that defensive coordinator Mel Tucker, who was hired by Trestman, decided to run the same system that Lovie Smith had utilized. The reason being that it was a veteran defense that had enjoyed much success with that scheme under Smith. The players didn’t play as well under Tucker in 2013 and Mel made changes to the scheme so that they would be doing things more to his liking this year.

The Bears either waived or decided not to re-sign a number of their own defensive players, but went hard after defensive players in free agency. Chicago particularly took aim at the defensive line with the signings of Jared Allen, Lamarr Houston and Willie Young. All three of those players enjoyed success at their previous clubs.

Chicago stayed with defense and drafted corner Kyle Fuller and defensive tackles Ego Ferguson and Will Sutton in the first three rounds. On paper, both teams looked as if they had strong drafts. 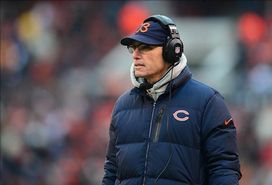 Trestman's Bears have to be one of the most disappointing teams in the league this season.

The fan bases of both clubs were excited, the teams had the right players in place and both looked as if they could make a run at the playoffs. In Chicago, not only were they taking playoffs, but perhaps a run at the Super Bowl.

All the optimism ended once the season began. Chicago opened the season at home as heavy favorites over the Buffalo Bills, but lost in overtime 23-20. Tampa Bay also opened at home and lost 20-14 to Carolina.

Things have not gotten any better since. Chicago has to be one of the most disappointing teams in the league, sitting with a 4-6 record and just one lone home victory. The team spent millions to fix the defense, but it has only gotten worse. During a two-game stretch that ended two weeks ago, the Bears surrendered more than 100 total points. That’s the first time that has happened in the NFL since 1923.

Jay Cutler, who was supposed to show improvement in his second season under Trestman, has regressed and now many are questioning not only his leadership but the overall leadership of the team. No one in the locker room wants to step forward and take charge.

Tampa Bay, which has a record of 2-8, was hit hard in training camp when offensive coordinator Jeff Tedford was stricken with a heart condition. The Bucs are trying to run an offense without the guy who designed it.

Lovie Smith has had much success over the years with his version of the Tampa-2 defense originally designed by Tony Dungy. The defense in Tampa hasn’t played well and, of course, the fans and media are blaming Lovie.

Having worked with Smith for a number of years, I know the scheme is sound, but it does take time to implement. Here in Chicago, we struggled the first year playing that same scheme, but once everyone got on the same page we had one of the better defensive units in the league. The problem with fans is that they want success right away and are unwilling to wait a year or two. Most fans will tell you they are sick of waiting for next year.

What looked like a big game six months ago is now a matchup of two teams trying to salvage a season and create positive momentum for 2015. The good news is that both clubs are coming off a win. The Bears beat Minnesota 21-13 last week in a matchup where the offense put up over 450 yards and the defense played perhaps its best game of the year.

Tampa Bay beat Washington on the road 27-7 with McCown throwing for 288 yards and two touchdowns. The defense finally did what Lovie has been asking them to do: Force turnovers. The Buccaneers forced three turnovers in the Washington game.

While this game has virtually no meaning outside of Chicago and Tampa Bay, it is a very important game for both clubs. A win means one of the teams is on the verge of going streaking. A loss puts another nail in the coffin of the loser.