Every year a few teams do much better or worse than we expected and become the big stories of the early season. This year the Buffalo Bills, Washington Redskins and Detroit Lions have played much better football than many thought they would, while Kansas City has been the opposite and played much worse. Let’s talk about each.

I grew up a Bills fan; in fact, my career in the NFL started out as a part-time scout for the Bills from 1981 through the 1984 draft. I then went to work for National Scouting for the ’84 season before joining the Giants in January 1985. I still consider myself a fan and I couldn’t be happier with the way they have started the season.

The Bills are playing very inspired football both offensively and defensively and are getting outstanding quarterback play from Ryan Fitzpatrick. Looking at their first two games, it’s not as if they have been lucky as they have outplayed their opponents. In the opener at Kansas City, a team many thought would win the AFC West, the Bills just dominated every phase of the game winning 41-7. In week two they came home to play a good Oakland Raiders team and after falling behind 21-3 at halftime, they came out in the second half and scored a touchdown on each of their five possessions to earn a 38-35 win.

In Fitzpatrick the Bills are getting quarterback play that is as good as any in the league. In two games he has thrown for 472 yards, 7 touchdowns and only 1 interception. He is proof positive that quarterbacks drafted in the latter rounds can develop into winning NFL players. At 28 years old, he is just reaching the prime of his career.

The Buffalo defense, which struggled last year, finally has the personnel to play a 3-4 and are playing consistent football. First-round pick Marcell Dareus is playing excellent football and while outside linebacker Shawne Merriman is not a full-time player, he is giving the Bills quality snaps when he is in the game.

Still, Buffalo plays in the tough AFC East where they have to compete against both the New England Patriots and the New York Jets, two of the strongest teams in the league. While the Bills may not be as good as their two rivals, they are closing the gap and may be a lot closer to being on equal ground than many think. This week's game against New England will show just how far the Bills have come and how much further they have to travel. 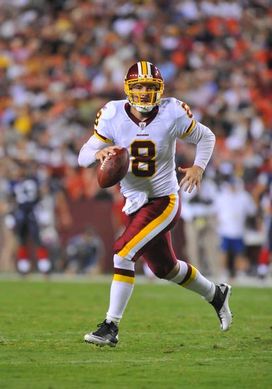 ICONRex Grossman has completed nearly 60 percent of his passes for 596 yards and 4 touchdowns.

While the Bills are the surprise team of the AFC, the Redskins have to be the surprise of the NFC. The Redskins have opened 2-0 beating the Giants and Arizona. In both games, they fell behind only to come back for wins behind the very good play of quarterback Rex Grossman. Grossman is off to his best start since he led Chicago to the 2006 NFC Championship. He has completed 59.7 percent of his passes for 596 yards and 4 touchdowns.

The national media love to criticize Grossman and I have always thought unfairly. As a starter, he has led his teams to the playoffs twice and one Super Bowl. Yes, he has had some poor games but he has also had some outstanding games. I know Rex well and he is tough-minded and very competitive. He’s a good fit for what the Redskins are asking him to do and I think he may become one of the surprise players of the year.

The Redskins as a whole are playing smart football and the defense led by coordinator Jim Haslett is very aggressive. Like Buffalo, they may not be the most talented team in their division but they are closing the gap. Monday night’s game in Dallas will tell a lot about how far this team can go. I predict a Washington win.

In my opinion, the Lions are not as much of a surprise as Buffalo and Washington. Last year I thought the Lions would take a big step only to stay put after quarterback Matt Stafford got injured. This organization has drafted very well since Martin Mayhew took over as general manager and have added some quality football players.

Stafford is playing his best football of his short career, throwing for 599 yards and 7 touchdowns. In Calvin Johnson he has one of the most talented receivers in the game and while Jahvid Best isn’t a pounder, he has the talent to come up with numerous big plays.

The defense is led by second-year pro Ndamukong Suh, who is quickly becoming one of the most feared defensive linemen in the game. The Lions play an aggressive attacking style of defense which suits Suh’s style of play. It’s been a long time since the Lions have been in the playoffs but with the way they have played in the first two games, it wouldn’t be a shocker if they win the NFC North. Over the last two years they have closed the gap between them and Green Bay and Chicago.

While Buffalo, Washington and Detroit have surprised many with the way they have come out winning, Kansas City has been just as big a surprise with the way the have been losing. In the first two games (one at home, one on the road) the Chiefs have been outscored by a total of 89-10. This is a team that a year ago was playing very physical football and showed dominating ability on both sides of the ball. Many people including myself picked them to win the AFC West this year.

I can’t tell you what is wrong, but a year ago this team was playing inspired football and this year looks flat. In the first two games they have thrown for only 252 yards, yet most of the league is throwing the ball in record numbers. Part of the reason could be that on offense the Chiefs have their third coordinator in three years. That’s hardly a way to develop cohesiveness on that side of the ball. The defense, which had an awesome pass rush a year ago, has only 1 sack in the first two games and they have given up 523 yards and 8 touchdown passes.

This week the Chiefs play at San Diego, the team they were supposed to battle for the AFC West title. If they don’t come back with a win, it could be a long year for the Kansas City fans.