Earlier this week in one of my “Training Camp Notes” posts I mentioned how NFL scouts would be hitting the road now that major college football training camps have begun to open. Since that article went live on NFP, I have been asked numerous times how scouts identify which players to look at when they make a school call, especially this early in the process. It’s a great question, but does not come with a short answer. Let me explain.

Most, but not all, NFL clubs belong to one of two scouting services known as National Football Scouting and BLESTO. National Scouting is based in Indianapolis and is headed by Jeff Foster, while BLESTO is headquartered in Jacksonville and run by Tom Modrak.

The purpose of these services is to create a prospect list for each of their members. It is basically a starting point that club scouts use when they make their initial school calls in the fall.

The scouting services create their prospect lists in the spring. While club scouts are going to pro days and gathering information on players in the draft, the scouting service scouts are busy looking at the upcoming seniors. The BLESTO and National scouts are usually assigned an area and are responsible for every school that plays football in that specific region. In the spring, these scouts watch tape, talk to some of the coaches and weigh, measure and sometimes time the seniors to be. If allowed, they will also administer the Wonderlic test to each of the players.

Once the scouts assemble all of the pertinent information, each one then writes a report and grades every player. He also makes a master list for each school that includes all the seniors, both graded and ungraded. These lists have all the important information such as height, weight, speed, Wonderlic score and grade. Generally speaking, this original list has only one scout’s opinion, as it is not a final grade. It’s a beginning grade to be used as a starting point. There are seldom cross checks done during spring evaluation of juniors.

While the scouting service scouts spend a majority of their time at the major schools, they are also responsible for the small schools. With these schools, they often talk to a coach to find out who he feels is a legitimate NFL prospect. If the coach recommends a player or players, then the scout will make a school call to watch tape, talk to the coaches and obtain measurables. Just as with the big schools, the scout then creates a master list with graded and ungraded players. 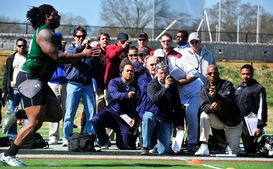 A scout's work is never finished.

The scouting service scouts have until approximately mid-May to create the lists and write reports on each prospect. These lists are then presented to the member clubs at a meeting around the last week of May.

When a club receives the prospect list, they often separate the players by level. Some clubs have the players listed by A, B, C and D levels. The area scout for each club will go into each school and look at all the prospects regardless of grade. That scout will also talk to the coaches and support staff to find out if there are any players who may be NFL prospects who failed to land on the original list. In many cases, especially at the major schools, there are new prospects added who weren’t on the original list. Often times, these are players who are getting their first chance to start or may be coming off an injury.

The coaching staff may not have wanted to recommend the player in the spring, but once they see him in action during the fall, they pass along the name for the club’s scouts to evaluate.

Clubs often send more than one scout into schools with highly rated prospects. While the area scout will look at all the players, the cross check or “over the top” scouts look at only the best players. If the area scout feels the scouting service rated a player too high or too low, he relates that information to his club so that the other scouts making a school call have the right information.

It’s important to remember that the grade a service scout puts on a prospect in the spring is only the beginning. Many times I have seen a player go into the season with a low scouting service grade and then turn out to be a premium level draft choice. The opposite is also true, as players who looked good as juniors don’t play as well during their senior year.

When club scouts make a school call, often the pro liaison will inform them that a certain underclassmen may be coming out. If that is the case, he may answer questions about that player. A rule of thumb is that scouts are never to ask about underclassmen unless someone from the school brings up the player during conversation. That rule comes directly from the league office, as the NFL wants their relationship with the colleges to be kept in good standing.

Often during the fall, word gets out that certain players are entertaining the idea of entering the draft. This may come from the media or the agent community. If a player is thinking about leaving school early, he may have his parents or a trusted friend perform research on certain agents. Once this happens, it’s hard to keep it quiet. But still, a scout can never bring up the underclassman’s name when on a school visit.

However, the scout can discretely analyze tape on the player and watch him during practice, but must make it a point to keep his thoughts to himself. Once that player officially enters the draft, then scouts are permitted to openly ask questions.

As the college season progresses, top players separate themselves from the pack, leading to increased interest in the school. The reason being is that these prospects will usually comprise the players taken during the premium rounds the following spring. It’s always interesting to see the players who many didn’t think much of in August turn out to be excellent prospects in November. Often times this is because the player matures and his hard work is finally beginning to pay off. It’s what makes scouting the intriguing profession that it is.