The ins and outs of pro days

Now that the Combine is over, what happens for the next four to five weeks? The month of March has pro days starting next week. There will be workouts scheduled Monday through Friday each week, with some days having as many as 8-10 scheduled on the same day all over the country. Because so many workouts are crammed into such a short period, it is virtually impossible to attend every one. Because of that problem the APT (Association of Professional Teams) was formed about seven or eight years ago to cover all the pro days. The APT is a group of about 24 NFL clubs, and each club is responsible for seven to eight schools to cover during the pro day season. The club would send one of its scouts to the assigned school to collect all the data from the workout. The information gathered would then be sent to the other member clubs of the APT. Anything that is measured is shared information. It includes the height, weight, arm length and hand span. It also includes 10, 20 and 40-yard times as well as the times for the 20-yard shuttle, 3-cone drill, standing long jump and vertical jump.

Almost every pro day is taped by the video staff of the school. What many clubs do is buy the tape if they can’t attend the workout. That way you can still watch certain players that they are interested in working out. The colleges do a great job of editing these tapes and getting them out to the clubs within a few days of the workouts. 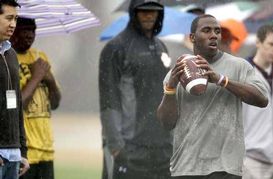 The one thing that is important about the pro days is the position drill segment. At the Combine, there are only about six to seven different position drills that each player does. These drills have been basically the same drills for years and have become “learned” because they have been practiced over and over again for weeks or months leading up to the Combine. At the pro day, coaches have their own set of drills that they want prospects to perform. Because the player has not had time to “rehearse” these drills it becomes an important part of the evaluation process. The coach not only wants to see the prospect do the drills correctly but he also wants to see how the player “takes” coaching. He wants to see if he has to explain the drills over and over or if the player “gets it” the first time. This is important because you can find out if the player is a “rep guy.” Over the years, I have seen many players who performed well at the Combine “bomb” at his pro day because he hasn’t had the chance to practice the drills beforehand.

If a club has a strong interest in a player they might not even go to his pro day, but schedule a “private” workout for another date. They do this because they will have an opportunity to spend “quality” time with the player. They may want to find out more about his personality or his ability to learn. Many times a coach will take the player into a meeting room and put him on “the board.” Here, a coach may ask the player to diagram some plays and walk him through the responsibilities he had for the play. The coach may also teach the player some of his club’s plays or schemes and then test the player on what was just taught to him. All of this is very important in putting together a final grade and determining if you want that player on your club.

An interesting part of the pro days at the major schools is that there may be kids from the smaller schools in that state also working out. With so many workouts scheduled in such a short period of time it has become very difficult to get to many of the small schools. For this reason, the NFL allows players from lower level schools to work out at the large schools within that state. For example, a player from Eastern Illinois or Western Illinois can work out at the Northwestern or Illinois pro day. At the same time, a player from Northwestern cannot workout at Illinois’ pro day. The large school has to agree to let the small school players work out but in most cases it’s not a problem. Often the small school prospects work out after the major school prospects are done. It makes for a long day for scouts but it gives the clubs valuable information as well as saving valuable time. It’s also a value to the smaller school prospects because the small school may not have the indoor facilities that many of the major schools have. With this, the player gets to work out under very good conditions.