The making of the 53-man roster

After the conclusion of the third preseason game, NFL clubs must get to the business of creating the final 53-man roster. In many cases, who makes the final 53 is pretty much determined after the second preseason game. Exceptions include when an untimely injury happens and a player targeted for the 53 lands on injured reserve.

Many believe that how a player performs in a preseason game is the sole determining factor. In some cases, it is. But often the decision is made on how a player practices and how he responds to classroom work. Coaches want players on the squad who can be trusted, meaning they know their assignments. You will see some players get cut over the next few weeks who made some big plays during the preseason, but don’t know or understand the playbook. These are oftentimes the type of guys who wind up on a practice squad—Players who have the physical tools, but need the extra practice time to really know and understand their assignments.

Who has the final decision on the roster?

Every NFL club has one and only one person with control over the 53-man roster. In essence, regardless of title, the person who holds this designation is the man who runs the club. In most cases, it is either the general manager or the head coach. It can’t be both.

Depending on who that person is, there can be a difference in philosophy. If it’s the head coach, the thought process is often on today. What I mean by that is coaches have to win in order to retain their jobs. If the coach has the final say on the roster, he is almost always going to choose players who are going to help him win today, not tomorrow. If he doesn’t win, there is no tomorrow.

On the other hand, the general manager also has to win, but he’s looking to the future of the franchise. He may choose to keep some younger players who have upside even though a limited veteran may be more helpful today.

Are their disagreements? Sure, but usually on just a few players. And if there is a good working relationship between the coach and GM, compromise will and does happen.

Is money a factor? 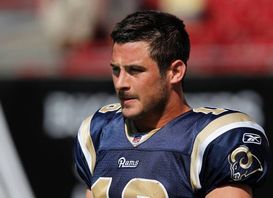 ICONPatriots wide receiver Danny Amendola spent time on the Dallas practice squad before catching on with St. Louis and recording a career-high 85 receptions in 2010.

Often, you can see a veteran chopped at the final cut-down and then brought back to the squad after the first game is played. The reason this happens is because if a vested veteran (over four years of service) is on the opening day roster, his contract is guaranteed for the season. If he is cut and brought back after the first game, then he is paid for only the games in which he is on the roster. For teams with minimal salary cap room, this is important in doing business.

What are the breakdowns by position?

This can and will change from team to team and often the scheme affects how many players a club keeps at each position. For example, a team that runs a 3-4 defense usually won’t keep as many defensive linemen as a 4-3 team. The same holds true for linebackers. The 3-4 team may carry more linebackers than the 4-3 club.

Teams used to keep three quarterbacks on the roster, but over the last few years, we have seen a trend towards retaining just two. The third quarterback is often a young player who has practice squad eligibility. He is dropped at the final cut-down and brought back the next day after he clears waivers. Since his chances of playing are very limited, there is no sense in keeping him on the final 53.

If a club has a young quarterback who they feel is a good developmental prospect and they won’t be able to slip him through waivers, they may choose to keep him on the final roster. You don’t want to expose a player that may have a good future to waivers. It’s just too risky.

How important are special teams in the process?

When things like this happen, the hope is that the player cut has practice squad eligibility, so that you can re-sign him to the practice squad if he clears waivers.

Clubs are always trying to play games when it gets to cut-down time. If a young player who is relatively unknown looks good in practice, the club may choose not to play him in the preseason games. The reason being is they don’t want to take a chance that he will make a few big plays in a game. If that happens, the other 31 clubs would see it on tape, decreasing the chances of that player clearing waivers.

Sometimes in these cases the club may choose to cut the player before the final cut down, limiting his chance to be claimed by another club. Once the rosters are set, they quietly re-sign the player to the practice squad with the hopes that he will continue to improve and eventually help the club in the future.

Over the next few weeks, watch how your favorite clubs trims its roster. In my opinion, it is always a fascinating time of year, mainly because there is so much gamesmanship implemented. You will see that there are more roster moves made in the first 2-3 weeks of the season than there are the rest of the season combined.