The year of the resurgence

While we have been entertained by some outstanding football for most of the 2014 season, the play of some quarterbacks, who many in the media felt had seen their best days, has gone virtually unnoticed.

Not only is Roethlisberger enjoying a resurgence, but so are the Steelers. And this is a classic example of one helping the other.

The Steelers were 8-8 in 2013 and there weren’t many (including me) who felt they would show much, if any, improvement in 2014. Offensive coordinator Todd Haley was under fire from the media and some were saying how he and Roethlisberger weren’t on the same page. When 2014 started off in a similar fashion with the Steelers splitting their first four games, that talk continued.

The Steelers are now sitting at 5-3, on the verge of winning another division championship and the criticism of Haley has gone silent. Roethlisberger is having perhaps his best season as an NFL quarterback with a 110.6 quarterback rating and just may be the AFC MVP.

When Palmer was playing for the Oakland Raiders, the thought process was that his best football was behind him and there was no way he could play like he did during his elite seasons with the Cincinnati Bengals. In fact, Palmer’s play had fallen off so dramatically that the Arizona Cardinals acquired him for a sixth-round pick in 2013 and a seventh-round selection in 2014. That is virtually nothing for a quarterback with Palmer’s resume. 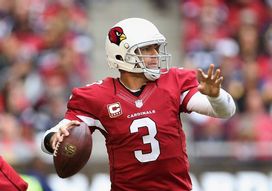 Palmer has guided the Cardinals to the best record in football.

With Palmer at quarterback, the Cardinals posted a 10-6 record in 2013. To date this season, Arizona is sitting on top of the NFC West with a 7-1 record. While Palmer showed improvement over his play in Oakland in 2013, there were still inconsistencies. However, this year he has played as good as ever in the five games he has started (missed three games due to injury).

For the season, Palmer has completed 116 of 188 passes for 1,385 yards, 11 touchdowns and only two interceptions. In Sunday’s win over Dallas, Palmer showed arm strength and zip that I haven’t seen out of him in years.

What has helped Palmer the most is the coaching of Bruce Arians. It’s becoming very obvious that Arians is one of the outstanding coaches in the NFL. Let’s not forget that when Ben Roethlisberger was playing great football early in his career, Arians was his coach. I don’t think it’s a coincidence.

After watching the Giants get beat up Monday night by the Colts, 40-24, it’s become apparent that New York should have made a coaching switch after last season.

Last year Big Blue finished 7-9 after starting the season 0-6. This year they started off 0-2 before a three-game win streak, but now the Giants have lost three in a row and the games haven’t been close.

Tom Coughlin is one of the great coaches in NFL history. There are few who prepare their teams for a game like Coughlin does and he has two Super Bowl victories to his credit. But since the team’s victory in Super Bowl XLVI, the Giants have gone downhill in a hurry.

There were many who felt that the Giants would make a change after last season. They didn’t and the thinking was that Coughlin had earned the right to try and turn around the team (he had!). But now a half season later, was that the right decision? The Giants aren’t any better than they were a year ago. Granted, injuries have played a huge role in the lack of success the Giants have had, but that’s part of football. Clubs are able to overcome injuries with depth. Right now, the Giants don’t have any depth.

I was a member of the Giants organization for 17 years early in my career and I have the utmost respect for the Mara family. Because of that it hurts me to see the club go through these down years. John Mara will do the right thing at the end of this season, but the question is by waiting that extra year, have the Giants set back the competitive value of the franchise?

Without a doubt, one of the big stories of the first half of the 2014 season is the turnaround of the Miami Dolphins. 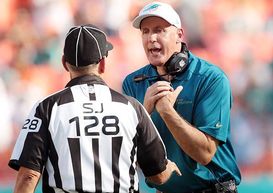 Philbin's seat will cool down for a while if he can get the Dolphins into the postseason.

Five games into the season, the Dolphins looked like they were dead. There was no fire or enthusiasm in their play. Head coach Joe Philbin was done and quarterback Ryan Tannehill was another first-round bust.

Since then, the Dolphins have won three straight and a playoff berth is not out of the question. Starting with their win over Chicago on October 19, the Dolphins victories have become more convincing each week. The 37-0 win over San Diego on Sunday may have been the best game the Dolphins have played in a couple of years.

In those three wins, Tannehill has completed better than 68 percent of his passes for 761 yards, six touchdowns and only one interception. It has clearly been the best stretch of games in his career.

The next three games will have a lot to do with how the Dolphins finish this season. All three are tough games with road dates at Detroit and Denver and a home game with Buffalo in between. Win all three and Miami would be just about a lock to make the playoffs. A playoff berth not only saves Philbin, but general manager Dennis Hickey as well. When Hickey took the job earlier this year, he only received a two-year contract, which is unheard off for a general manager. A playoff berth should earn Hickey an extension.