Thanksgiving weekend is always the major rivalry weekend in college football. While they may not always be important games as far as the national rankings are concerned, they are always very important to the schools and their fans. A head coach who is having a tough season can sometimes buy himself another year with a win in his school’s biggest rivalry game.

As a scout, I have been fortunate enough to attend many of these games over the years. My first three years with the Giants I attended the Texas A&M -Texas game. One of those years I went to the game in Austin on Thanksgiving, then the following day flew to Tulsa for the Oklahoma State-Oklahoma showdown in Stillwater. That Saturday there was a treacherous ice and snow storm which made driving very difficult. I never made it to the stadium and wound up watching the game on television.

Twice I attended the Egg Bowl between Mississippi and Mississippi State, once in Oxford and once in Starkville. While Oxford is easy to reach (about a one-hour drive from Memphis), Starkville is in the middle of nowhere.

The year I attended the Egg Bowl in Starkville, I flew to Atlanta and then took a commuter plane to Columbus, Mississippi, which is right next to Starkville. I don’t remember much about the game, but when I got to the Columbus airport after the matchup I found out my flight was going to be delayed because of an engine problem. They never got the problem fixed and Delta Airlines ended up bussing all the passengers to Atlanta. We didn’t reach Atlanta until about 2:30am Sunday morning. I wound up sleeping in the Atlanta airport for a few hours before I could get the first flight out to Buffalo (my hometown at the time) on Sunday morning. 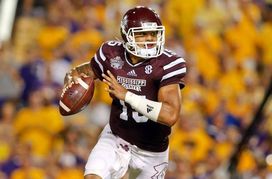 Dak Prescott and the Bulldogs look to survive the Egg Bowl on Saturday.

I have to admit, going to the Egg Bowl when it is played in Oxford is much more fun. The football tradition at Ole Miss is outstanding and walking around the campus before the game is a blast. The tailgate parties in The Grove are second to none. During the game, I don’t think I saw anyone sit down and it seemed like every adult had a plastic cup full of bourbon, which must be another tradition I didn’t know about.

Another top rivalry game I attended once was the annual sunshine state showdown between Florida and Florida State. That game I went to was at Florida during the Urban Meyer era. It was 2009 and it was Tim Tebow’s last home game as a Gator.

The Florida-Florida State rivalry can be very intense because the majority of the players come from the state of Florida and were recruited by both schools. 2009 was a down year for Florida State as the Seminoles finished the regular season at 6-6. Florida, on the other hand, was undefeated with an 11-0 record going into the game.

The Gators won easily 37-10 with Tebow completing 17 of 21 passes for 221 yards and three touchdowns. His favorite target that game was the infamous Aaron Hernandez, who caught five passes for 83 yards and two scores.

The game I always wanted to attend but could never fit into my schedule was the Iron Bowl between Alabama and Auburn. As many of you know, in the state of Alabama, you declare your allegiance to one of those schools on the day you are born.

While all rivalries are intense, that game may feature the most electricity. In recent years, the Iron Bowl has been a deciding factor in who plays in the SEC Championship game. Saturday’s showdown is no different and also carries implications as to who may play in the first-ever college football playoffs. The Egg Bowl carries similar implications.

If Auburn and Mississippi win on Saturday, it could very well knock Alabama and Mississippi State out of the playoffs. That alone will make for two hard fought games. Enjoy the fun!