What the Mario Williams deal means to Buffalo

I always hoped the Bills won…except when they were playing the club I worked for. You might move out of town but you always remain a fan. With that being said, I can say this about myself and many other Bills fans: it’s a great day in Buff! 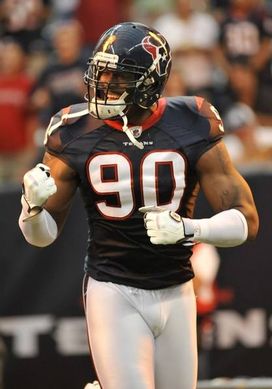 ICONMario Williams is the newest member of the Bills.

The Buffalo Bills signing Mario Williams is the biggest signing by the Bills since they signed Jim Kelly in 1986. We all know what that signing did. Kelly immediately made the Bills a viable team in the AFC and that led to four straight Super Bowl appearances in the early 90’s.

Williams is one of the best defensive players in the game. In recent years, Buffalo tried to convert to a 3-4 defense from a 4-3 and failed because they didn’t have the personnel to play that scheme. With the appointment of Dave Wannstedt as defensive coordinator the Bills will be going back to an attacking 4-3 scheme. Williams gives them the edge pass rusher they need for that defense to be successful.

It also shows that Ralph Wilson will do what it takes to get a winner. There have been times in the last few years when that motivation has been questioned. Buffalo hasn’t been a “player” in the free agent market for years. While they have signed some fairly good players, they haven’t gone after the big ticket name player. In this year’s free agent market there isn’t a bigger defensive name than Mario Williams. It also tells us that General Manager Buddy Nix has done a great job selling to Wilson the need to spend money to get top players to come to Buffalo.

The Bills play in the tough AFC East where they have to compete with New England and the New York Jets every year. In the past decade the Bills haven’t been a factor in that division. While the Bills play hard they just haven’t had the overall talent and depth to challenge for the top of the division. The signing of Williams still doesn’t put them on par with the Pats and the Jets but it gets them closer. If they can add a couple of more “role” players in free agency and add some quality talent in this year’s draft they will have closed the gap considerably.

The other thing the signing of Williams does is it shows both the league and other players that the Bills will now be a factor in the future for top free agents. They now have to feel that they are on a level playing field with the rest of the league in acquiring talent in the open market. Congratulations to Buddy Nix and the rest of the Bills organization!