Last week I wrote an NFL preview for the National Football Post, but because of technical difficulties with our site it never got published. It’s a good thing, because I was wrong on every one of my predictions. Going forward, if you like to wager on professional football games, go against what I say and you are sure to make some money.

Last week was great for the underdogs. Looking at this weekend’s slate of action, I’m not so sure that recent history will repeat itself. Saying that, here are my thoughts on a few of the games.

Who would have thought that after Week 1, the New England Patriots would be the lone team in the AFC East to have sustained a loss?

Miami and Buffalo were both big underdogs last week, but the Bills totally outplayed Chicago to win in overtime 23-20. At the same time, the Dolphins were manhandling the Patriots.

The weather in Buffalo is going to be a cool 63 degrees and that will seem frigid to the visitors from South Beach. Buffalo fans are on a high following the announcement that Buffalo Sabres owner Terry Pegula will be become the new owner of the Bills. That means the Bills will remain in Buffalo.

My feeling is that the home crowd is going to make this very difficult for the Dolphins and with the Bills on a high after their win in Chicago, the Bills will win easily. 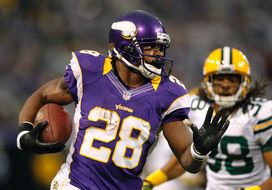 The Vikings will be without the services of Adrian Peterson on Sunday.

Up until Friday, I thought the Vikings might have a chance in this one after playing so well in their opener at St. Louis. But after the Adrian Peterson scandal broke, this game will be all Patriots.

The Pats played poorly in Miami and I can’t see a Bill Belichick team playing that way two weeks in a row.

Without Peterson, the Vikings lose a huge part of their offense. The Patriots can concentrate on the passing game and putting pressure on Matt Cassel. I like the Pats by 10.

Matt Stafford and the Lions looked great in whipping the horrible New York Giants 35-14. The problem for the Lions is that the Carolina Panthers are not the Giants. The Panthers have one of the better defenses in the league as they demonstrated in their 20-14 win at Tampa Bay and I think they will give Stafford and the Detroit offense all they can handle.

This is the home opener for Carolina and Cam Newton is making his 2014 debut. The Panthers will be able to do a lot more offensively with Newton at the helm. I look for the Panthers to win by three.

This game will be the grand opening of the 49ers’ new stadium in Santa Clara. The 49ers won easily on the road at Dallas last week and I expect them to be sky high for this Sunday night showdown.

Chicago spent a lot of money trying to upgrade their defense during free agency and all the new players laid an egg last Sunday against Buffalo. The Bears gave up just shy of 200 rushing yards at 5.0 yards per carry to the Bills. Between Frank Gore and Carlos Hyde, the 49ers have a stronger ground game than Buffalo.

Jay Cutler was playing fairly well last week until the fourth quarter when he threw his usual untimely interception that took the Bears out of the game. This week, both Brandon Marshall and Alshon Jeffery will be playing hurt and that spells bad news for Chicago. The offensive line will also be without two starters.