As we say goodbye to Candlestick Park, the longtime home of the San Francisco 49ers, it appears as good a time as any to rank the NFL stadiums. Over 17 years, I worked and provided medical coverage in all 31 current NFL stadiums. And while facilities are usually ranked based on fan amenities and home field advantage, instead, this column will evaluate the worst stadiums from a medical/safety perspective focusing on locker rooms, field safety and medical facilities. Not surprisingly, the fan based approach and the safety approach tend to match.

Oakland, San Diego and San Francisco are the worst venues in the league. All three were built as multi-purpose baseball/football stadiums and have small, outdated locker rooms. Players double up to dress in small stalls. All three visiting training rooms are no bigger than a small bedroom, leading to an impossible fit for the typical travelling medical staff of eight caring for 53 players. Most road teams prepare for a game using showers and hallways for taping tables, cold/hot tubs, treatment and equipment areas. None of the three stadiums have a dedicated examination room. This makes it difficult to comply with privacy laws and to provide a quiet environment for both the mandatory concussion examinations and sequestering of concussed players.

The Oakland Coliseum is by far the worst stadium in the NFL. It is the only multipurpose field remaingin that still houses both an NFL and MLB team. Early season home games are played with the baseball diamond intact. Besides being unsightly, the dirt/grass transitions actually can cause injury. Earlier this season, Chargers linebacker Jarret Johnson suffered a hamstring injury after slipping on the transition from grass to dirt as he chased down Raiders quarterback Terrelle Pryor. Even when the dirt is gone, the multi-use grass areas are harder, with thinner grass to accommodate a rolling baseball. I’m not a groundskeeper, but if you every walked on the grass of football-only stadiums, it feels significantly different and more cushioned.

All NFL teams are required to have in-stadium X-ray facilities. In Oakland, the dedicated X-ray room is three flights of stairs from the field and two flights from the locker room. Imagine trying to help a 300+ pound player with a lower extremity injury. There is no way to transport a player by cart to his own locker room or training room.

In 1998, long time Chargers right tackle Vaughn Parker suffered a broken fibula while playing in Oakland. Our staff could not get him up the stairs and, as a result, Parker had to be carted out the opposite side of the stadium via a circuitous route. Halfway up the ramp, the cart ran out of power. I sat there with Parker while we waited for a second cart. After moving to the second cart, we had to travel outside the stadium, back to the opposite side of the Coliseum while enduring the catcalls of ticketless Raiders fans who were tailgating in the parking lot during the game. Even after the 20-minute process required to travel to the X-ray facility confirmed a broken ankle, we had no easy way to get Parker to the locker room. Ironically, this player was the NFLPA team union representative. 15 years later, these stadium conditions have not changed.

California’s stadium issues are related to the statewide squabbling over use of public funds for new facilities. San Francisco will finally have the state-of-the-art Levi’s Stadium next season. The Spanos family (San Diego) has worked hard for over a decade and continues to strive for a new San Diego stadium. The Raiders only extended their lease for one season in the hopes of a long-term solution. In this player safety era, change can’t come soon enough. 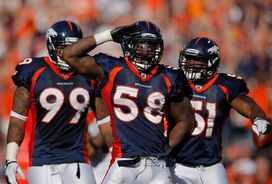 Miller (center) was likely lost for the season Sunday at Houston.

Miller’s right knee buckled while engaged with blockers in Houston on Sunday during Denver’s 37-13 win. By video analysis, Miller suffered a non-contact “giving way” injury that is consistent with an ACL tear mechanism. The Broncos were reported to fear the worst. There is no question that Miller had an ACL type mechanism, but the hope is that the shifting stopped just short of a tear.

In the past, Houston’s Reliant Stadium field has been blamed for a variety of injuries, as the grass is installed on wooden pallets where the seams are sometimes uneven. Some blamed former New England Patriots wide receiver Wes Welker’s 2010 ACL tear on the uneven turf. Miller reportedly told team doctors that he had been dealing with looseness in his knee and his condition became aggravated by the sodded turf.

While an MRI is forthcoming, I still believe that the excellent Denver medical staff already know whether Miller’s ACL was torn or not based on their early examination.

The first overall pick in the 2008 NFL Draft suffered a significant right knee injury Sunday against Tampa Bay and was carted off with a team orthopedist. Initial analysis of Long’s non-contact injury after he went down revealed the dreaded ACL tear.

After the game, St. Louis head coach Jeff Fisher confirmed that Long did indeed tear his ACL, pending further confirmatory tests. Best of luck as the star offensive lineman will likely be headed for surgery and IR. With the medical advances discussed in this column last week, Long has a chance to return for the first game of the 2014 season.

Smith pulled up on a slant route Sunday against the New Orleans Saints with a left knee injury. He left the game and returned for one play before retiring to “ice up.” 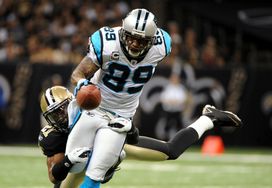 US PRESSWIREWill Smith be ready to go for the Panthers' upcoming playoff run?

There is optimism that Smith’s injury is not significant. This non-contact injury did not appear to resemble an ACL tear. The Panthers medical staff allowed the star wide receiver to return to the game. Even though Smith only returned for one play, if he had knee laxity, swelling, weakness or loss of motion, the team’s medical staff would not have allowed it. He did reportedly hear a pop and, as a result, will undergo an MRI. The scan is unlikely to show a significant ligament injury and could show cartilage or even a distal hamstring injury, but should not prevent participation during Carolina’s impending playoff run.

Minnesota Vikings running back Adrian Peterson wasn’t the only ball-carrier to produce a career season coming off of ACL surgery last year. Chiefs running back Jamaal Charles had a personal best 1500+ rushing yards last season after overcoming the same injury.

As well as Charles did last year, it is a medical fact that the kn ee is even better the second season back after an ACL surgery. A graft is used to reconstruct the ligament and it takes up to 18 months for the body to incorporate the new tissue. As an orthopedic surgeon, I tell my patients that we may target 4-6 months to return to sports, but they will continue to improve for at least 18 months.

Joe Flacco suffered a blow to the left knee last Monday night at Detroit but was able to finish the game. By video analysis, it was correctly diagnosed as a mild MCL sprain. This week, Flacco played a tentative game against New England after throwing two interceptions. The Super Bowl champion exhibited poor footwork while wearing a knee brace and even tripped himself.

Tannehill was sacked and fell on a flexed left knee Sunday at Buffalo. By video analysis, his injury should be mild (strain/contusion). Tannehille returned to play after the injury and noted after the game that his knee wasn’t a major concern.

A quarterback’s lead leg is particularly vulnerable. Tom Brady and Carson Palmer suffered ACL tears in their lead leg. As a quarterback steps into a throw, the lead left leg on a right-handed quarterback is particularly vulnerable. Many signal-callers routinely wear a prophylactic knee brace on their lead leg. Flacco wore one Sunday and Tannehill may need one next week, but they both should be able to start their team’s respective must-win games next Sunday.

MMMD 6: When will Wes Welker return from concussion?

Wes Welker has sustained two concussions in less than a month. We don’t know if one was related to the other, but we do know that the wide receiver has now missed his second consecutive game.

As stated in the past, concussions are like snowflakes, with no two being the same. Even though this sentiment is true, we know that successive concussions are not a good thing. What we also know is that once a player misses a second consecutive game, the absence may become prolonged.

Most players with concussions are cleared to return the following game. The trend is that when a player continues with symptoms and misses a second consecutive game, the absence may be extended. For example, Washington tight end Jordan Reed experienced recurring concussion symptoms at two weeks and was placed on IR last week after missing his fourth game.

I am not saying Welker will miss the playoffs or be placed on IR. Knowing him personally, Welker is the type of player who will do anything to play. One can hope that he is just getting precautionary rest since the Broncos have clinched a playoff spot and not because he is having continued symptoms.

The Green Bay star linebacker fractured his thumb on October 6 and missed four games as a result. The Bennett’s fracture is where the thumb breaks and slides out of joint at the base of the thumb. Matthews’ injury required surgery, but he returned on November 10 after missing four games. Matthews was still playing with a small cast when he re-injured the same thumb on Sunday against Pittsburgh. 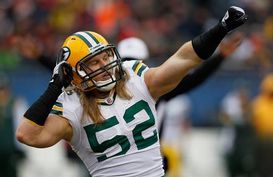 Between the healing time and playing in a cast, I expected Matthews to be properly protected. However, this is the NFL, where the forces are great and anything can happen. This re-injury likely means revision surgery and the end of Matthews’ season, even if the Packers go deep into the playoffs.

The question now is how this re-fracture experience at 11 weeks removed from injury will affect the Packers thinking regarding quarterback Aaron Rodgers’ 8-week-old clavicle fracture.

The Aaron Rodgers dilemma is a risk/reward decision. The Packers medical staff has a deciding vote and provides the factual backdrop, but the final call is an “organizational decision,” as indicated by head coach Mike McCarthy. There needs to be a unanimous “yes” vote in order for Rodgers to play. And while McCarthy felt Rodgers looked ready to play last Sunday, the decisions of team physician Dr. MacKenzie and general manager Ted Thompson were not known, but at least one or both voted “no” for this past Sunday.

This week may be a different story as the Packers are still alive and need a victory at Soldier Field in order to win the NFC North. I am not privy to any of the films on Rodgers (nor am I second guessing), but based on my NFL experience, the reward may finally outweigh the risk.